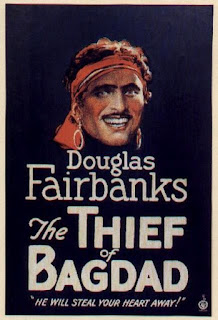 This is the kind of film I always wanted to see more of but had never gotten around to.

Described as the Prince of Thieves, Ahmed (Douglas Fairbanks) has his way stealing at will from the townspeople around Bagdad. One day when trying to steal from the palace, he falls in love with the Princess (Julanne Johnston) and decides that she is the true treasure. Impersonating a prince he wins he heart and her hand in marriage but decides to confess to her his real identity. Despite this revelation she still loves him and he is a changed man, but is caught by the palace guards. She saves him and gains time so she won't have to marry any of the other repulsive suitors. He goes on a perilous quest in order to obtain the rarest of treasures to win the hand of the princess.

It seems that Disney's Aladdin lifted a lot from this original film, the 1940 remake, and of course the collection of stories, Arabian Nights.

Be weary, this film isn't for the average movie-goer. It is a silent, black and white film that is 140 minutes long. It's a tad difficult to get through in one sitting especially since you can't just listen to the dialogue to get the gist of the plot, you really have to watch it. Just because I watched it doesn't necessarily mean you should, but I do have to say I was pleasantly surprised at how much I enjoyed the film. The special effects are hilarious but for the 20s I'd have to say they were pretty awesome.

I would only recommend watching The Thief of Bagdad (1924) to those that have the time and willpower to sit through a 2½ hour silent picture. I would however recommend anyone to watch at least one silent film of the era (The Artist (2011) may be good but doesn't count in this case) to see how film has evolved and what the "talkies" were born from.

Notes:
- Out of the 100 films included in AFI's 10 Top 10 List, The Thief of Bagdad is the oldest. It is one of two silent films on the list (I think), the other being City Lights (1931) starring Charlie Chaplin.
- To give you an idea of how old this movie is, the handsome leading man Douglas Fairbanks, was born in 1883. He also died the year World War II started.
- This was a big career step for Anna May Wong who played a Mongol slave girl. Wong was the first Chinese-American movie star.