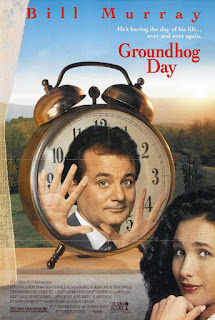 Bill Murray at his finest. He teams up with writer, director, occasional actor, and good friend Harold Ramis. Andie MacDowell is Bill's lovely co-star who is charming and enchanting.

Phil Connors (Bill Murray) is a bitter meteorologist and has to go to a small Pennsylvania town to cover the Groundhog Day festivities. When he finishes his report he wants to get back to Pittsburgh as soon as possible but is snowed in and has to stay the night. The next morning he finds himself reliving the same events as the day before, simply because the day is repeating itself. After early concerns of the endless time loop, he has some fun since there are no consequences. However, as the loop continues and from the wisdom of his news producer Rita (MacDowell), he begins to soften and starts to help people and better himself. After a great evening with Rita, he wakes to find that tomorrow has finally come and he has become a changed man.

Wouldn't it be awesome to have a day repeat, so that you could perfect the day's events? As appealing as that sounds in certain cases, it would take the fun out of the surprises that life throws at us. They aren't always good surprises but we learn and grow from them. Bill seems to get a kick out of the whole infinite loop thing though so it's endlessly entertaining.

Groundhog Day (1993) is pretty cheesy with the goodness and morality that comes from it but it provides a lot of humour along the way, thanks to Ramis and Murray. You can't go wrong with #8 on AFI's Top 10 Fantasy list.

Notes:
- Andie MacDowell has some great genes. Have you seen her daughters? Simply stunning.
- Chris Elliot plays Larry, Phil's cameraman, and he is a great supporting actor. He's never really had much in the lead role department though. You can see him as Lily's father Mickey, a recurring role on How I Met Your Mother.