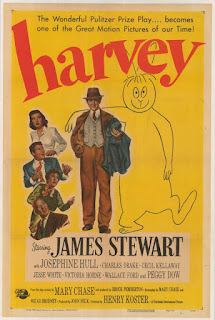 Crazy guy with a 6-foot tall invisible rabbit friend. Sound familiar? No I'm not talking about Donnie Darko, which is a fantastic movie by the way, but I think it took a few plot points from Harvey (1950). There are some major differences but the main plot point is pretty much the same except that Donnie Darko is rather morbid, in stark contrast to Harvey.

Jimmy Stewart plays Elwood P. Dowd whose best friend is a 6'3.5" invisible rabbit named Harvey. Elwood doesn't have a job (it is implied he's inherited some money from his late mother) but he goes down to the bar everyday with Harvey and has a drink or two. He is very friendly, generous, kind, and sociable, he's pretty much the perfect stranger. His sister Veta (Josephine Hull) is stuck in the harshness of reality and rather dismayed at her brother's condition and tries to get him committed to a sanitarium. Hilarity ensues when she is taken in as the crazy one and Elwood continues on his day oblivious and simply content with everything in the world.

I'm glad you never get to see the character Harvey, I think it would tarnish the film a bit. You do get to see that he looks like but that doesn't really ruin things.

This has now become one of my favourite movies. I can't really describe why exactly, it's just so enjoyable to see a character like Elwood, who is pleasant, agreeable, patient, and generally everything many people in today's society aren't. I'm not sure if it's because I just enjoy older movies but I'd definitely suggest you watch Harvey (1950) for a pick me up. It may be in black and white and a little goofy but unlike the Donnie Darko viewing experience, you actually feel good afterwards. Just my opinion on that one.

Notes:
- Harvey is described as a Pooka, a creature from Celtic mythology.
- Despite being 6'3 himself, Jimmy Stewart always seems to look up at Harvey throughout the film.
- In the film  Josephine Hull plays Veta Louise Simmons, Elwood's older sister. In fact Hull was 31 years Jimmy Stewart's senior and roughly the same age as his mother.
- Harvey has the ability to stop time, but doesn't seem to use it in the film (except at the end, if you really think about it)
- The story of Harvey was originally a play of the same name which was later written into a screenplay by it's playwright Mary Chase.
- Very recently it has been revived on Broadway with Jim Parsons playing the role of Elwood.