This year we have seen the release of two very different takes on the classic story of Snow White and the Seven Dwarfs. I'll be comparing the two and tell you which one I liked best, although it won't be hard to tell which. 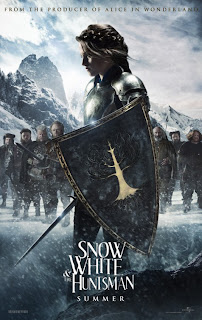 A lot of people give Kristen Stewart a bad rap for being in the Twilight movies and being a terrible actress. Now she's no Meryl Streep, honestly I might even pick Amanda Seyfried over her, but she isn't nearly as bad as people think. It's mostly just blind following and people jumping on the "I Hate Twilight" bandwagon. I've never seen any of the Twilight films so I couldn't tell you of her performances in those movies but she does a decent job here.

I very much enjoy the path they took the story on in this version. It is a darker tale and I believe deserves to be treated as such. It is very gritty and looks like it more closely suits what people of the time might have looked like....dirty.

The film itself is visually stunning. The effects and the sets are beautiful and I think they did a great job casting the roles. Yes  Kristen Stewart is pale and has the dark hair to contrast it, but that is exactly what the role of Snow White asks for. Chris Hemsworth does a great job as the Huntsman, cynical and drunk exactly what he should be. Charlize Theron does the Evil Queen justice and is charming in a twisted and malevolent way. My favourite part surprisingly enough was the casting of the dwarves. You may recognize the voices of some of the dwarves because they are some pretty big names. In no particular order: Beith (Ian McShane), Muir (Bob Hoskins), Gort (Ray Winstone), Nion (Nick Frost), Duir (Eddie Marsan), Coll (Toby Jones), Quert (Johnny Harris), Gus (Brian Gleeson). If you haven't seen any of the first five dwarves listed before, you really need to get out more....or I guess stay in.

The action wasn't quite as epic as I had hoped and the ending was kind of weird but overall I enjoyed it a fair bit, I wouldn't necessarily go out of my way to watch it again but if it was on TV I wouldn't change the channel. 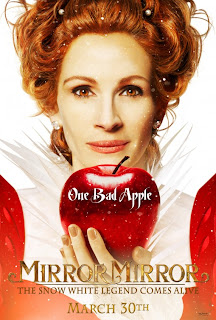 Unlike the film outlined above, Mirror Mirror is very childish and comedic. There is basically no seriousness involved at all which is a stark contrast to both the original and Snow White and the Huntsman, but it does go well with the Disney version.

I like Julia Roberts but I can't really get on board with her as the Evil Queen. Really she's not really all that evil, she's vain and insecure and just has the means to kill people. Lily Collins has been described as like Audrey Hepburn but with the eyebrows of Liam Gallagher. I like her, she brings a nice positiveness that Kristen really couldn't have. She's enchanting and fits the Snow White specs perfectly. Armie Hammer plays Prince Alcott and he may be tall and handsome but I just don't like him. After watching The Social Network and his protrayal of the Winklevoss twins, he just kind of irks me. The dwarves are exactly that (hope that's not offensive), there is no camera trickery or CG faking, these guys are actually that short.

The action is rather pathetic but it's basically a kids movie. So not much else to say about that. The strong point for Mirror Mirror was the costume design. It definitely brought some fun and Alice in Wonderland-esque feel to it.

The ending is just odd. I mean it's formulaic in some regards, they all live happily ever after. Except for the Evil Queen....who dies. Sean Bean appears at the end as Snow White's father, the King. After Snow White and the Prince get married she goes into some Bollywood style number that has some vague semblance to being relevant.

All in all it was mildly entertaining but I would reserve it mainly for children. On the bright side, Sean Bean wasn't killed in the making of this film.

......Die Hard because it's always an appropriate time to watch Die Hard.

Notes:
- In both films the Evil Queen dies, as per the original story, but their fates aren't quite as brutally torturous as the one devised by the Brothers Grimm. In the original story the Queen is punished by being forced to wear burning hot iron shoes and dance until she dies. You have to hand it to them, they really knew how to write an ending.
- Lily Collins is in fact the daughter of musician Phil Collins.
- British model Lily Cole has a cameo in  Snow White and the Huntsman as Greta.