It's taken me a while to get around to starting this rather large undertaking, but here goes the first of many. 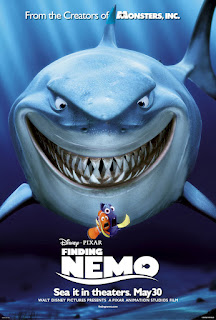 One of the early Disney/Pixar greats, Finding Nemo (2003) is a simple story of a how a father loses his son and must face his fears and go to great lengths to find Nemo. It just so happens they're fish as well. It's an inspiring story and if it were live action it would have a more dramatic, serious tone to the film but the fact that it's animated lends itself to a much broader audience and room for crazier adventures.

Albert Brooks voices the great, yet overbearing and overprotective father clownfish Marlin, and Ellen Degeneres lended her voice to our favourite inept companion, Dory. Ellen went on to have a very productive year, when she also began the very popular The Ellen Degeneres Show. Having to pay voice actors significantly less than on-screen actors leads to the brilliance of voice over work and gave Disney/Pixar the chance to get so many great small parts and cameos voiced by so many great actors.

No one really cares who voiced Nemo so I won't bother including it.

A lot of people think that great children's animated films have to be extremely dumbed down for kids and can't be scary at all. Disney/Pixar has really shown that this isn't the case and have reached a much wider audience because of it. I find Pixar films tend to be a little edgy, a little scary, and contain some subtle crude jokes that some younger viewers might not get, but that's the beauty of the Pixar way. Since their films are crafted in such a manner, parents (along with other older viewers) can breathe easy knowing these kinds of movies won't be a bad influence for their kids but they can also get some great laughs out of the movie too.

Well I'm rambling so I'll cut it short. Finding Nemo (2003) won Pixar's first Academy Award for Best Animated Feature and deservedly so. It is a great story and fantastic overall film to be enjoyed by all ages, and I'm glad that out of all the animated greats, AFI gave it the #10 spot.

Notes:
- John Ratzenberger has had a voice part in every single Pixar feature film but is probably best known for his role of Cliff Clavin on Cheers.