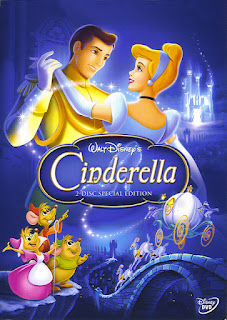 There are so many romantic comedies and unfortunately crappy teen movies that have parodied or just copied the story of this classic story that Disney helped make famous back in early age of great animated film. Cinderella (1950) is one of my favourite Disney movies of all time and it is probably one of the major causes for my love of romantic comedies, as it was probably one of the very first ones I ever saw.

Despite going through hardships and being taking advantage of in her own home, Cinderella is shown to be a strong female character that is intelligent, kind, respectful, and can take care of things herself not to mention taking care of the ruthless Lady Tremaine, her petulant daughters Drizella and Anastasia, and the meddlesome cat Lucifer. She does get some help by her bird and mouse friends, especially Gus and Jaq, who make an adorable duo.

Cinderella's fairy Godmother, brings a great warmth and light to Cinderella in her time of need and is the exact opposite of Cinderella's stepmother which shows nice contrast. Just in case you didn't hate Lady Tremaine enough by this point in the movie. The King and the Grand Duke, have a hilarious relationship that definitely creates some more humour in the somewhat gloomy atmosphere of the film. Now here we come to the Prince who, despite being an integral part of the story, doesn't do a lot nor does he say very much.

Like the ending states, "They lived happily ever after", and where that may not be completely realistic in actual relationships, I would think that these two have a pretty decent chance at making it. For one, the Prince seems pretty level headed and despite being royalty and he doesn't seem pushy or condescending (from the very little we see). Secondly, and most importantly, Cinderella knows the importance of hard work and coming from a tough lifestyle could appreciate the high life without having it effect the person that she is at heart. Of course all of these ramblings are speculation, unless I have any desire to watch the Cinderella direct-to-DVD sequels.....which I do not.

As I said earlier, one of my favourite Disney films, I would have personally put it higher up the list, easily in my Top 5. Ever feeling bummed or stressed about things in real life? Delude yourself by watching this unrealistic animated classic!

Notes:
- The late Ilene Woods, was relatively unknown when she was chosen by Walt Disney to voice Cinderella. By the time she was 14, she already her own radio show and in coming years would do great work in radio. When she was 19, she was approached by her friends Mack David and Jerry Livingston to provide vocals for two songs they wrote, unbeknownst to her that they were prepared for a new Disney film.
- Later in his life, Walt Disney had said that Cinderella was his favourite of his movie heroines.
- The great voice actress June Foray (who may be best known as the voice of Granny in pretty much every incarnation of The Looney Tunes as well as Rocky the Flying Squirrel from Rocky and Bullwinkle) voiced Lucifer the cat.