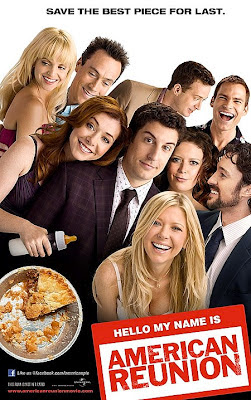 I have been waiting for this movie for quite some time now. It was such a shame that they had the end the series on a bit of a downer in American Wedding, without a lot of the original cast. It was good but it wasn't as good as it could have been. As for the movies that came out after the third one....well I don't count those and neither should you. In any case, none of those matter because we have finally arrived at the American Reunion (2012).

It's the East Great Falls Class of '99 high school reunion and everyone, and I mean everyone is back. Of course the constant cast of Jim, Michelle, Stifler, Jim's dad, Kevin, and Finch (played by Jason Biggs, Alyson Hannigan, Seann William Scott, Eugene Levy, Thomas Ian Nicholas, and Eddie Kaye Thomas respectively) are all back but we see some old faces that at least I've been missing since American Pie 2. American Wedding was seriously lacking when most notably Oz (Chris Klein), Heather (Mena Suvari), Vicky (Tara Reid), Jessica (Natasha Lyonne), Sherman (Chris Owen) and Nadia (Shannon Elizabeth) didn't return. Thankfully they are all back for the reunion and it's going to be one hell of a night.

Not to be too lazy but I think the American Reunion site says it best:

In the comedy American Reunion, all the American Pie characters we met a little more than a decade ago are returning to East Great Falls for their high-school reunion. In one long-overdue weekend, they will discover what has changed, who hasn't and that time and distance can't break the bonds of friendship.

It was summer 1999 when four small-town Michigan boys began a quest to lose their virginity. In the years that have passed, Jim and Michelle married while Kevin and Vicky said goodbye. Oz and Heather grew apart, but Finch still longs for Stifler's mom. Now these lifelong friends have come home as adults to reminisce about - and get inspired by - the hormonal teens who launched a comedy legend.


Going to see a movie on opening night never felt so good. It was a great return to the awesomeness that is the American Pie series. There were some really great moments but you could tell the movie had a slightly different feel to it compared to the older ones. Of course, all the characters are 13 years older so it's to be expected that the atmosphere has changed. Honestly though, a couple parts seemed a little forced and a little uneven around the beginning of the movie, mainly because they had to tell so much of everyone's story again. Despite a bit of a rocky start, the movie ended strong, definitely up to par with some of the older ones of the series, and although predictable in many ways there are some great surprises in store that, I have to say, are very gratifying. My only main disappointment was how long certain returning characters appeared in the movie. Some deservedly got some more screen time like the return of both Oz and Heather, and John Cho as Milf Guy #2, but Jessica's, Sherman's, and Nadia's parts were kind of lackluster. Of course you expected it from the trailer but Stifler's mom (Jennifer Coolidge) makes a great return. I do have to say that while the movie is mostly about Jim, and Stifler often takes the cake (or should I say pie?.....No...no I shouldn't), Noah Levenstein (Jim's Dad) has been the real backbone to the hilarious embarrassment throughout the years.

All said and done, this was an awesome movie, a much better sequel than all of American Pie 4-7 combined, not quite the same as the original three (not saying it's worse, just a little different), but I was laughing out loud pretty often in the theater. I would definitely recommend going to see it if you enjoyed any of the first three installments of the franchise at all, I doubt you'll be disappointed.

Note:
- Even including the "other" American Pie movies, Eugene Levy is the only actor of the series to appear in every single installment.
- Two of Alyson Hannigan's co-stars from How I Met Your Mother appeared in cameos or small parts in the movie. Charlene Amoia (Wendy the Waitress) plays the part of Ellie, Kevin's wife, and Neil Patrick Harris is a host of what seems shockingly like Dancing With the Stars.
- If you still don't remember or somehow forgot, Thomas Ian Nicholas who plays Kevin, starred in early 90's classics like Rookie of the Year and A Kid in King Arthur's court.
- Not all that important, but I have to say that Ali Cobrin who plays Jim's inappropriate younger neighbour Kara, reminds me of a young Marisa Tomei, who at 47 is still smokin'. Just saying.