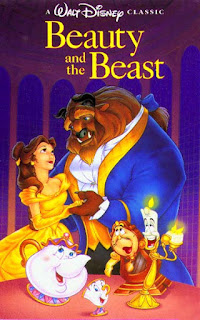 I actually had a chance to watch this movie again when it came back to theaters. As much as it is still a timeless classic it was definitely not worth any extra to watch it in 3D. I will go so far as to say the 3D was a detriment to the classically animated Disney film.

I'd probably say that Belle and Cinderella are tied for first for my favourite Disney Princess. I mean they all certainly have their merits but I would give an edge to these two. Cinderella is strong and hardworking, and Belle is smart, witty, and stands up for what she believes in; and both are beautiful but don't flaunt it. There can be endless arguments for other princesses but we're getting off topic.

Beauty and the Beast (1991) is again one of my Disney favourites (Let's face it, most of them are. They are just that good.) and for good reason. The protagonist is a strong female character and the man (but at first, beast) she falls in love with is a terribly flawed character. He is not only grotesque and hideous, but he is bitter, angry, and shows no compassion to others. Although he isn't a perfect gentleman to begin with, taking Belle as his prisoner isn't a good start, he starts to soften as time wears on due to Belle's warm and caring nature. I think that the Beast is a symbol for whatever flaws we may have and that we it is possible to find that someone that can love us for all of who we are, not just the good things and that's why so many can connect with this movie and the character.

Of course we can't forget the man that tries to woo Belle on a daily basis, Gaston. He is ignorant, disrespectful, and just about the biggest narcissist you might ever encounter. He is basically the epitome of all the things that any self-respecting person wouldn't be able to stand in a relationship. He's got a great singing voice though and gets some awesome songs throughout the film. He is also followed around by his rather forgettable sidekick Maurice.

The only other characters I feel inclined to mention are Lumiere, Cogsworth, and Mrs. Potts. I'll talk about Mrs. Potts a little further down. Lumiere and Cogsworth have a great double act thing going for them, where Lumiere is the comedic, fun-loving one and Cogsworth is more of the serious straight man but does have a fun side too.

I need to also mention the wonderful music, which is half of what makes a Disney film so perfect. Whether it's the title song or Lumiere's amazing rendition of "Be Our Guest", you can't help fall in love with the score of this film.

This movie is well-rounded in how it brings in so many different genres into one film and has the brilliant singing performances and score to back it up. So get together with someone you care about. It could be a friend, a family member, a girlfriend, a boyfriend, a spouse, even a pet. Just have a great time watching a timeless movie. For those lovebugs, snuggle up close to your special someone and let a great Disney film inspire wonder and awe all over again.

Notes:
- Won two Oscars in 1991, one for Best Original Song and one for Best Original Score. Well done Alan Menken and Howard Ashman.
- Beauty and the Beast also had two other songs nominated in the Best Original Song category: "Belle" and "Be Our Guest". Ultimately the title song, "Beauty and the Beast" brought home the gold.
- Here is one more Oscar fact just because I feel like it. Beauty and the Beast became the first animated film to be nominated for Best Picture at the Academy Awards and one of three all time (Up in 2009, Toy Story 3 in 2010).
- Belle is voiced by Paige O'Hara, but few would actually care.
- Mrs. Potts is voiced by Angela Lansbury. For those uninformed, she is the old lady from Murder, She Wrote, she also starred in Bedknobs and Broomsticks. If you need more than that, I would suggest you brush up on your knowledge of old British actresses.