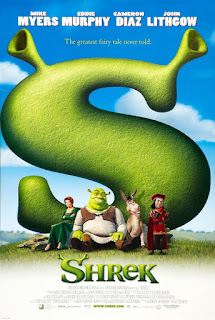 As Kermit the Frog so elegantly put it, "It's not easy being green". Those words apply so well in this case. The lovable and curiously Scottish ogre, Shrek, made a huge impression when he hit the big screen in 2001. His adventures that take him from his swamp, to the kingdom of Duloc, to a dragon's lair and back, captured the hearts of audiences of all ages.

And now is the point where I stop writing like this is a crappy, over exaggerated movie ad.

So anyway, Shrek (voiced by Canadian funny man Mike Myers) is just trying to get some peace and quiet in his swamp when everyone's favourite fairytale characters rain on his parade. In order to get his swamp back he has to find Lord Farquaad (John Lithgow) all the while annoyed by Donkey, voiced by the great, yet more recently unfunny, Eddie Murphy (come on, you know it's true). Ordered by Lord Farquaad, Shrek has to rescue damsel Princess Fiona (Cameron Diaz) in order to get things back the way they were. But unfortunately for this ogre, things will never be the same.

As much as I am a fan of Disney and Disney/Pixar films, I'm glad that DreamWorks Animation got a movie in the Top 10. DreamWorks is a great animation studio that has done a lot of amazing films; if you forget some of their great work (let's face it, we can't remember them all) check out the list here. I definitely love Shrek but I'm not sure if it deserves to be higher on AFI's Top 10 list than Finding Nemo or Cinderella.

Shrek also has a pretty good soundtrack including: Bad Reputation by Joan Jett, Hallelujah by Rufus Wainwright, and All Star and I'm a Believer (the original version by The Monkees is far superior) by Smash Mouth.
Shrek has brought us great entertainment over the years with the sequels Shrek 2, Shrek the Third, and Shrek: Forever After. We've also seen a spinoff franchise in 2011's Puss in Boots.

If you have some time on your hands and jonesing for some animated film, go ahead and watch the whole quadrilogy. It'll be great fun and there's only like a 50% chance you'll regret the six hours you just spent watching a fat, green, Scottish ogre and his annoying donkey get into all sorts of trouble.

Notes:
- Shrek (2001) won the inaugural Academy Award for Best Animated Feature in 2001
- Chris Farley had originally been chosen to voice Shrek and allegedly he recorded most of the voice parts before his untimely death in 1997.
- When Mike Myers was chosen as Farley's replacement, he asked to have a script rewrite as to not tread on Chris's work.
- Even when Mike had completed all the voice recordings for the new scripted version, he asked the studio to re-record them but this time in a Scottish accent. Thankfully for all of us, they agreed.