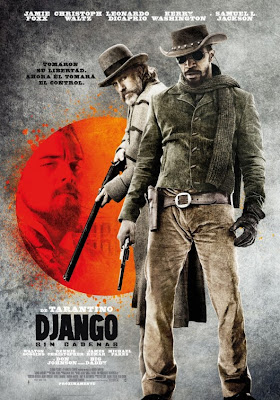 I've really been slacking with writing about movies I see, I mean I saw this movie way back in 2012. Don't worry I'm still watching an unhealthy number of movies, I just haven't been writing anything about them. Hopefully that will change in the new year.

Django Unchained is Quentin Tarantino's latest gore-filled creation. Trying to recreate the spaghetti western feel of the days of yore, it follows Dr. King Schultz (Christoph Waltz), a former German dentist turned bounty hunter and his companion Django (Jamie Foxx), a former black slave freed in order to aid Schultz in bringing in a bounty. Django also must rescue his wife who has been sold to a different slave owner.

At 165 minutes this movie is long, not LOTR long, but long for action movies these days. Fortunately, there is enough humour and action for it not to be unbearable.

Now this film may be offensive in a couple ways. Firstly, the "n-word" is used very freely (for historical purposes) but it can still offend. Also, as much as there are ridiculously fake gory and violent scenes, there are some pretty intense ones that may make some viewers uncomfortable. It's not for everyone and some people may overhype the movie so be weary. If you can get past these things then you're in for a hell of a ride.

I'm not even close to being an expert on Tarantino films but while they are hilarious, gory, and violent, they all take a different approach to things and in my opinion difficult to compare directly. Definitely one of my favourites of his and I'd have to rewatch them all to give you a definitive answer.

I loved the acting by Waltz and Foxx, they seemed to have an interesting on-screen chemistry. DiCaprio was downright creepy in the best sort of sense and Samuel L. Jackson has the most ridiculous and out of place role in the film but that's the beauty of it. Kerry Washington played Django's wife and was kind of annoying actually but her acting isn't the focal point of the film so it doesn't really matter. There were also some pretty hysterical cameos by Don Johnson and Jonah Hill in a scene that not many film-makers could get away with even with the comedy. Tarantino appears in the film as well but his scene is rather forgettable.

Also I hear there is something at the end of the credits, although I don't think it's much. I wanted to stay until the end because that is my tradition but I had company and didn't want to keep everyone waiting. So keep that in mind.

I was probably one of the best films I've seen this year and I'll definitely watch it again. Just prepared to watch a nearly three hour movie. I'd also suggest not seeing it in 3D. It's a gimmick that hurts your eyes and is definitely not worth the extra few dollars tacked onto your ticket.