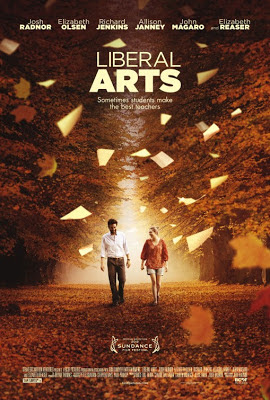 Josh Radnor is back in the director's chair as well as his usual on-screen Ted Mosby-like leading man in Liberal Arts. This is his second film as a director after happythankyoumoreplease in 2010.

Anyway, let's cut to what the movie is about. Jesse is a 35-year old admissions officer who has returned to his Alma Mater to see an old college professor (Richard Jenkins) who is retiring. Along the way he meets Zibby (Elizabeth Olsen), a 19-year old sophomore taking Drama, who he seems to really connect with. Jesse struggles with the fact that, although they get along well, he is 16 years her senior.

I laughed pretty hard in this little scene where Jesse tries to justify a relationship with some simple math.

We also see small parts from Allison Janney (playing one of Jesse's old professors), Zac Efron (a hippie who befriends Jesse and possibly not even a real person), and Elizabeth Reaser (a girl working at a bookstore).

Now this film is far from perfect but I think that two movies into the directorial game, Radnor is doing alright. The plot is a little random at times because although there is a defined plot line, there are also a lot of bits and pieces just shoved in. I loved Elizabeth Olsen in this film she does a great job and I think she is probably a lot more normal and grounded than her two older sisters. Either that or she is a better actress than I thought.

It's definitely a funny movie but it doesn't overpower the issues it tries to tackle. I think these kinds of films always give me a little more insight into my life, it's usually something I already know but it reinforces it and makes it a little more concrete. This movie is about love, life, and finding what we love to do in life and how  to hold on to it. If you like indie films and don't mind seeing Josh Radnor keep playing Ted then I'd seriously recommend this film.

Notes:
- Poster image obtained from www.impawards.com
- Zac Efron plays Nat, a kind of....I guess "angel" I'll refer it as, a minor character who doesn't really do much directly but seems to push the plot forward. If you remember Rowan Atkinson's character in Love Actually....same thing.