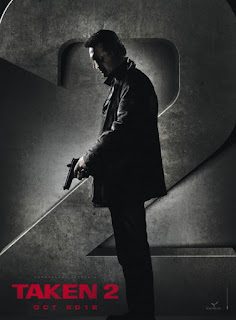 So I finally mustered the courage to watch what was bound to be a terrible sequel to a decent film. Sadly my expectations were met with this mess of a Hollywood action film.

With that being said I was still entertained with Taken 2, there are very few films that I don't actually enjoy. It's just that the plot was old news and the events along the way made even less sense than the original. One scene that really irked me was when Bryan (Liam Neeson) was about to be taken along with his ex-wife Lenny (Famke Janssen). The bad guys just let him take out his cell phone and complete a call to his daughter Kim (Maggie Grace). He told her how to escape and hide and they didn't do a damn thing about it despite wanting to kidnap her too. It is mind-boggling what the screenwriter or director, or whoever had the executive power over that scene, was thinking. Taken (2008) wasn't perfect by any means but it was at least more original and there was some semblance of logic to actions in the movie.

Rade Serbedzija is back to fill in the generic Eastern European role that he does so well. That being said he never sounds any different in any of his films. I can't really distinguish between Eastern European languages that much but he's played a lot of different ethnicities that just happen to have the same accent. Liam is good as always despite poor writing and a subpar movie.

I did enjoy the inclusion of the song Too Close by Alex Clare over the final credits but the ending itself was a bit random, as if nothing had happened at all. When the whole movie has a badass like Liam Neeson killing countless henchmen, blowing stuff up, and getting into epic car chases and the ending involves a laugh with his family and her daughter's new boyfriend over some milkshakes? Well that's just pathetic. The boyfriend had no bearing on the movie at all, except that it filled up the first 10 minutes and made the ending fit for a rom-com.

I almost forgot that I didn't tell you about the plot, you can read about it here. Oh I linked you to the wrong movie? Actually if you think about I really didn't.

I don't feel like talking about this movie anymore, it's making me depressed. If you have some time to kill and want to see some mindless action, you can give it a watch but there are much better movies for just that purpose. In any other case, save your money, save your time, save your bandwidth, it's just not worth it.

Notes:
- Poster image obtained from www.impawards.com
- You may not recognize Rade Serbedzija's name but you may remember some of his work
- Boris the Blade from Snatch. (2000)
- Gregorovitch from Harry Potter and the Deathly Hallows: Part 1 (2010)
- Homeless guy receiving coat from Bruce Wayne in Batman Begins (2005)
- Tibor, that guy in Bratislava in the movie Eurotrip (2004)
- In any case he's typecast pretty badly these days as any character that sounds vaguely Russian