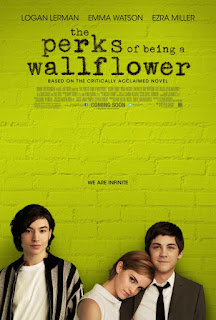 A lot of you have probably already seen it and that's cool but for those who haven't you're really missing out. The Perks of Being a Wallflower is based on a novel of the same name written by Stephen Chbosky. Chbosky also wrote the screenplay as well as directed the film. I'm not sure how faithful it is to the book but if I were to take a guess, I'd say it was pretty close.

Now this is a real teen movie. My knowledge is still quite limited and stunted when it comes to certain movies and movie eras but the teen movie, in my experience has had some major ups and downs. I think the genre really started to bloom around the Brat Pack/John Hughes 80s era. The movies in this era tended to hit hard on the issues that plagued teens that never had much attention in film before and it really stuck with a lot of people. I grew up a little after this era but enjoy these movies nonetheless. Why? Because they are timeless and are still relevant to a lot of insecurities, family issues, and fears that teens face on a day to day basis. For example, The Breakfast Club (1985) could have been written in today's world and barely any of it would be different. The 90s saw a shift towards the more stupid and comedic which was fine because they still resonated with a lot of teens but in a more lighthearted way. Some of my favourites are Can't Hardly Wait (1998) and 10 Things I Hate About You (1999). In my opinion the 2000s were a major let down and the genre slid a little too far down the stupid ladder, hitting every rung on the way down, so I had lost some faith in Hollywood. Suffice it to say it's been a while since I was genuinely excited while watching a teen movie and that's where The Perks of Being a Wallflower comes in.

It has a Breakfast Club type feel, covering a lot of bases when it comes to teen problems and again it is rather timeless. I mean it's set in the early 90s so many of the themes are similar to the great teen films of yore, but the setting doesn't exactly matter because it isn't the focus of the film. It does mainly look at an outsider's perspective on the high school experience but I truly believe that almost any teen, in fact any adult, can relate to some part of this film in some way. It talks about being insecure and afraid, not having friends, messing things up, all the great moments that shape a person throughout their adolescent years.

I think the cast is great and works really well together. I personally enjoyed Ezra Miller's role of Patrick, he did a really great job and you should check it out if not for the film itself then just for his performance. Emma Watson got the American accent down pretty well but it will never be quite right because in the back of my mind she's Hermione Granger. In interviews she's said that this is exactly the thing she wants to avoid. Hopefully in time I, as well as everyone else, can suspend the image of that brilliant little witch from Hogwarts for a couple hours to fully enjoy some of her films. For some reason I was not a fan of Logan Lerman before this film, probably because that Percy Jackson film just looked terrible to me. In any case he did a good job, he's still young and from the looks of things he's got a bright future as long as he doesn't pull a Lindsay Lohan. The rest of the cast ties things together but I've already talked enough as it is so I'll just leave it at that.

I think this movie is beneficial for anyone to watch. Even if by some minute chance there is nothing in this movie you can relate to, you can have a better understanding of what other people you know might have gone through, or maybe are still are going through. Hopefully you enjoy it as much as I did.

Notes:
- Poster image obtained from www.impawards.com
- Kind of a weird fact but the three main actors in the film were all born in the 90s. Watson, Lerman, and Miller in '90, '92, and '93, respectively. Perhaps a new "Brat Pack" will form one of these days and the teen dramedy will return with a vengeance. Well I can only hope.