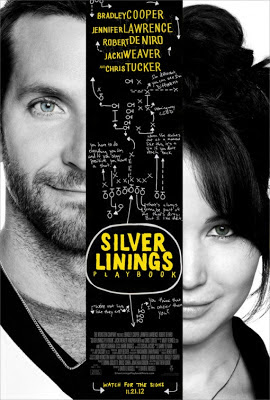 I'm a real sucker for romantic comedies, but when it involves very damaged characters, it's definitely a winning combination in my book. Unlike some comedies, Silver Linings Playbook tends to be funnier from the natural traits of the characters involved and what may naturally come from situations. It is based on the 2008 novel of the same name written by Matthew Quick.

Pat (Bradley Cooper) suffers from bipolar disorder and is trying to get his life together and get back with his wife Nikki, after having stayed eight months in a mental health facility. He is finding it hard to stave off violent episodes but has a positive outlook on his rehabilitation and tries to find the "silver lining" in things. Pat meets Tiffany (Jennifer Lawrence) at a dinner party who has recently lost her husband Tommy and they find each other as unexpected and rather damaged friends. There's more to it but I really think you should watch it and I don't want to spoil it for you.

When I saw the trailer for this movie I was very skeptical about the Jennifer Lawrence and Bradley Cooper pairing, mainly due to the age gap. I'm always glad to be proved wrong. Despite Cooper being 15 years her senior it really didn't seem like that big of a gap. Lawrence played a lot older than she is and the age discrepancy wasn't anything that was that apparent. Of course that is just my opinion. The two leads have great chemistry and it really showed on screen. Robert De Niro delivers his usual great performance as Pat's father, Pat Sr. De Niro is looking like an old man these days, which is fine because he is in fact old. I just keep picturing him in his earlier tough guy roles. Jacki Weaver does an amazing job as Dolores, Pat Jr's mother and Pat Sr's wife. Why do people name their kids after themselves, it makes it so freaking confusing? I haven't seen Weaver in many roles but recently she's been in The Five Year Engagement (2012), a rather underrated movie (well it's underrated for what it is). Chris Tucker finally has a role that doesn't annoy me.

The "Playbook" part of the title is in reference to the role football has in the plot. The "Silver Linings" I've already told you about. Now it's not a movie that is going to shock you with any plot twists that you won't see coming from a mile away but it's real. It's real because of the people involved. Romantic comedies always have more or less normal people as the protagonists that fall in love but people aren't normal. Albeit Lawrence and Cooper are ridiculously attractive and are not a great representation of a typical couple, but would you watch it if it were just some random people?....Yeah, I thought so. Each character has their own huge flaw and in many ways very similar to Pat and Tiffany. This drives home a fact I very much enjoy, the fact that people with mental illness are just people. There is still a stigma surrounding mental illness and this movie does a little bit to help with it.

This movie is more of a romantic dramedy (as much as I hate fusion words) rather than a true rom-com but it will make you laugh, it might make you cry, and hopefully it teaches you something. Probably my favourite romantic film of the year, just saying.

Notes:
- Poster image obtained from www.impawards.com
- This is the second time Bradley Cooper and Robert De Niro have worked together. The first time being in Limitless (2011).
- Director David O. Russell has done some great work in the past like I Heart Huckabees (2004) and The Fighter (2010).