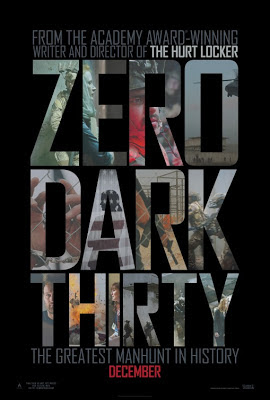 We will never know the exact details of the operation to kill Osama Bin Laden but Zero Dark Thirty gives us and over dramatized version of what could have happened. The plot is so simple that I've summed it up in the first line. However, most of the film revolves around the gathering of intel and not much about the preparing of the mission at all. In that respect I was a little disappointed. I think showing the Navy Seals running drills and preparing for arguably the most important raid in US counter-terrorism, would have been cool. Instead all they show them doing is barbecuing and playing horseshoes.

There are a lot of great reviews about this film but I wasn't blown away by it. The acting was superb I'm not debating that, Jessica Chastain definitely deserved the Oscar nomination for her performance, but it just didn't resonate with me. Perhaps it's because the film and the events aren't quite as symbolic as if I were American but it just didn't do it for me. It was a wonderfully made film and Kathryn Bigelow did another great job but I definitely thought The Hurt Locker (2008) was a much better film.

I also found that it made the CIA and SEAL Team Six (DEVGRU) appear sort of incapable and at times cruel and unprofessional. They didn't portray them in the most flattering of lights and I'm not sure if it was meant to be that way but I'd like to think that the CIA has a little more control than it does in the film. Also the main character Maya was said to have been recruited right out of high school and from my estimates worked for the CIA for three years and the age of 21 was tasked to work in the small group to take down Osama Bin Laden. It just doesn't seem believable to me. I'm not sure if I'd trust a 21 year old high school graduate to basically run an operation costing billions of dollars of taxpayer money. The movie ran on hunches and guesses about certain intelligence and I highly doubt that would ever be the case with something of that magnitude.

There are a lot of amazing actors that didn't really have big enough roles to really do much with. Chris Pratt and Joel Edgerton played two of the Navy Seals but didn't really have anything of note to say. Mark Strong appeared about halfway through the film and he definitely looks weird actually having hair. There are more small bit parts but you can just watch it and see for yourself.

There has been a lot of controversy surrounding this film, the torture scenes in particular. They are pretty brutal and a lot of people say they are justifying torture if it gets them Osama Bin Laden. There is are a lot of political implications and all that jazz, you can read about it on your own time. It's very important stuff to talk about, but I don't really care for it.

With all this ranting I still enjoyed the film but at a little over two and a half hours it seemed a lot longer than it was. There was some slow progression and if you're anticipating seeing an high octane action movie about the raid that's not what this is. It has the same feel as The Hurt Locker but it didn't quite do the same thing for me. The bottom line is that it's not fantastic but I'd still go to see it. Although a screener version has already been leaked so I wouldn't recommend actually paying for it.

Notes:
- Poster image obtained from www.impawards.com
- Proof reading is for chumps and I'm sure you can tell that I never do it for these posts.