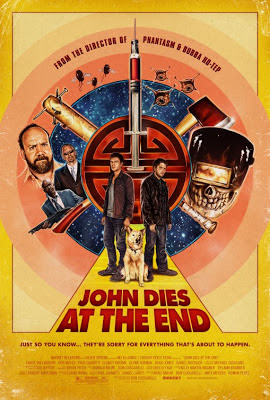 I'm not really sure how to describe this movie. It's kind of a weird combination of different genres but I saw it as a mix of Supernatural, Ghostbusters, Shaun of the Dead, the weird parts of Across the Universe, and a generic horror B-movie. It's a comedic-horror film but it's mostly comedic. Don't let the spoiler of a title deter you, it was definitely great to watch despite having a confusing plot and not making much sense at times. John Dies at the End is a cool little indie film with a couple big names but mostly new up and coming actors.

IMDb tends to usually do a pretty good job at summarizing things into a line or two so I'll let them do the work:

A new street drug that sends its users across time and dimensions has one drawback: some people return as no longer human. Can two college dropouts save humankind from this silent, otherworldly invasion?

The two college dropouts are David (Chase Williamson) and John (Rob Mayes) and despite being the titular it is not John, but David who is our main protagonist. The events of the movie are being recounted by David to a journalist Arnie Blondestone played by the brilliant Paul Giamatti. Sprinkled throughout their crazy journey are weirdos Roger North (Doug Jones) and Dr. Marconi (Clancy Brown). The fate of the dimension rests on their shoulders to defeat the creature Korrok (voiced by Kevin Michael Richardson).

John Dies at the End is not for everyone. Saying it's a weird movie is an understatement but I think it has a cool supernatural quality with an interesting time-travel like twist. From the description above if it sounds unappealing then don't bother watching it. However, if you're anything like me and love weird movies then  go check it out and enjoy this strange potpourri of film elements.

Notes:
- Poster image obtained from www.impawards.com
- You may remember Doug Jones from Guillermo del Toro films Hellboy and Hellboy II: The Golden Army as Abe Sapien, as well as in Pan's Labyrinth as the creepy eye monster.
- Most people won't recognize Clancy Brown but he is the voice of Mr. Krabs from Spongebob Squarepants amongst various other voice roles.
- Kevin Michael Richardson is an amazing voice actor and the only time I've seen him act live-action was in a season 4 episode of How I Met Your Mother.
- For some reason I was thinking that Rob Mayes looks like a cross between Liam Hemsworth and the late Heath Ledger.
- Also Jimmy Wong, an avid YouTuber and aspiriing actor, plays the role of Fred Chu. He is the younger brother of YouTuber Freddie Wong.
- You can purchase John Dies at the End through their website and also through iTunes, Amazon, and the like.