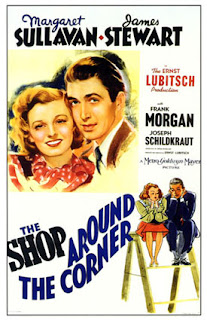 One thing I didn't know was that this movie was the inspiration for one my favourite 90's rom-coms, You've Got Mail (1998). This film was ultimately based on Parfumerie, a 1937 Hungarian play written by Miklós László.

Although it's in black and white and more about romance than anything, the spirit of Christmas still rings through in the end.

If you've ever seen You've Got Mail you probably know the important parts of the plot but there are quite a few differences between the two films. The story begins in Budapest, Hungary (although very few of the actors even attempt an accent) and it follows the employees of a shop owned by Mr. Matuschek and their relationships. Mr. Matuschek's right hand man is Alfred Kralik and the store owner holds him in high regard. One day a young woman, Klara Novak, comes into the shop looking for a job and so begins a rather insidious relationship between Novak and Kralik. Meanwhile we learn that Kralik has been corresponding with a mystery woman as a pen pal and quickly becomes infatuated with her only from her letters. We also see that Miss Novak is the exact same situation but neither realize who their secret pen pal really is. This starts a complex dance around and towards each other, culminating in a rather obvious ending, just in time for the holidays.

Also something to note, while there are many differences in the settings and subplots in the two films, the coffee shop scene in You've Got Mail (you know the one I'm talking about) is copied almost line for line from the same scene in The Shop Around the Corner. Even Tom Hanks' banter with Dave Chapelle's character in the scene is pretty spot on.

As far as romantic comedies go I'm quite partial to the Tom Hanks/Meg Ryan pairing but Jimmy Stewart and Margaret Sullivan give them a run for their money. I really liked this movie because all the characters complement each other really well and form a cohesive storyline, whereas in You've Got Mail a lot of the film's characters are easily forgettable and don't bring a lot to the table.
This movie reminds us that love may be closer than you think and you can always find some form of love around the holidays.