Movie of the Day - Armageddon

Today's movie is one of my favourite movie of the 90's and it's a great example of the failure of Hollywood physics. 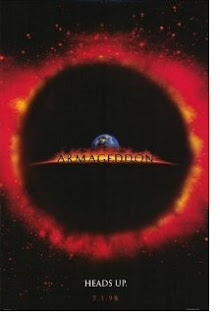 An asteroid is headed towards Earth and the only thing that can save us is Bruce Willis and his merry band of oil drillers. NASA`s brilliant plan is to nuke the rock from the inside, blowing it apart enough for the leftover pieces to clear the Earth, saving humankind once again.

As farfetched and ludicrous as this movie was it`s still enjoyable due to a good mix of humour, Michael Bay CG-effect induced seizures, and a surprising bit of seriousness.

Directed by Michael Bay which is no surprise.

So this movie has a pretty impressive cast and they all seem to pull their weight relatively well. Yes, even Ben Affleck. This movie got a lot of terrible reviews and got nominated for seven Razzies (kind of like the Oscars but for the worst of the worst). I really don't care it's still one of my favourite movies.

Before I go into any real detail about the cast, since there are so many of them I'll just say a few general things. Billy Bob Thornton actually played a role I liked which really surprised me because he seems like a terrible person in real life. Owen Wilson's character did not have nearly enough screen time, although with the general tone of the movie it might have worked out. Ben Affleck although not doing a great job was decent enough such that I didn't stop the movie. It pains me to remember that he's already won an Oscar, albeit for screenwriting and not acting.

So without further ado here is the cast, the actors that have any sizable character in the movie.

Bruce Willis as Harry Stamper. It wasn't that bad a performance, although it's no John McClane. He actually won the Razzie for Worst Actor that year but that doesn't really tarnish his reputation in my eyes.

Ben Affleck as A.J. Frost, one of Harry's crew and Grace's love interest.

Liv Tyler as Grace Stamper, Harry's daughter and pretty much the only explored female character in the movie.
Billy Bob Thornton as Dan Truman, some dude at NASA. Too lazy to actually figure out what his official position was.

Will Patton as Charles "Chick" Chappel

Owen Wilson as Oscar Choice who had no real purpose in the movie which is terribly unfortunate.

Chris Ellis as NASA flight director Clark. I think an under-appreciated actor, he never gets any substantial roles but he plays his roles well.

Jason Isaacs as Dr. Ronald Quincy, or informally referred to as "pretty much the smartest man on the planet". You may not recognize him but he played Lucius Malfoy throughout the Harry Potter series.

Just to note, the whole concept of blowing apart an asteroid the size of Texas with a single nuclear warhead is simply idiotic. Think of it this way, if you were to do the same thing in Texas it wouldn't blow the state in two. I was sitting in on a seminar a few years ago where some visiting professor was taking a look at the physics in Hollywood movies. I believe he said that Armageddon was one of the worst in terms of realism second to only The Core (an even more ridiculous movie). He made some rough calculations and he told us something along the lines of, if the nuclear warhead was 10 000 times the strength of the one dropped on Hiroshima and all the energy was used to push apart the two pieces of rock not even for breaking it in two, the two pieces would travel apart at a rate of 2 cm/s. I realize completely trusting these "rough" calculations can be extremely misleading but if he's anywhere close this could never be any realistically viable solution. I would just accept it and live the last couple days to the fullest.

I found the soundtrack to this movie pretty awesome. I think it's the only CD I ever really listened to (I wasn't really into much music until P2P file sharing got started). The song "I Don't Want to Miss a Thing" by Aerosmith has an interesting honour that only three other songs share. It was nominated for both an Academy Award for Best Original Song as well as a Golden Raspberry Award for Worst Original Song. It won neither which is both good and bad.

This movie really emphasizes a willing suspension of disbelief. If you can do that and enjoy gratuitous amounts of explosions than this is the movie for you! Seriously though, just watch it when you're folding laundry or some other tedious menial task because it requires no thinking what-so-ever.