Movie of the Day - An American Tail

So I thought I would give up trying to write about new movies since it's pretty much a lost cause due to cheapness.

I'm just going to write about the movies I happen to watch on a day-to-day basis and that I'd recommend to you. 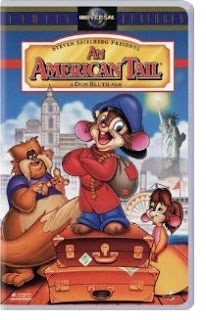 This movie is and always will be a classic for me.

In 1885, Fievel Mousekewitz and his family are moving to the America, from their homeland of Russia, to seek a country without cats (or so says Papa Mousekewitz). Fievel loses his way and is separated from his family but this loveable mouse and his friends save the day and they all live happily ever after...and all that crap.

Anyhow, it made a pretty big splash at the box office taking in $84 million which, at that day and age for an animated non-Disney movie, was pretty good.

Not really many big names as far as actors go but there are a few veterans of the game who produce some pretty memorable supporting roles.

An American Tail was directed by Don Bluth who started at The Walt Disney Company but left in 1979 to form his own studio. While Don was at Disney he worked on such movies as Sleeping Beauty, The Sword in the Stone, and Robin Hood (one of my all-time favourite Disney movies). He then left in 1979 to form Sullivan Bluth Studios with Morris Sullivan. He went on to direct a lot of big name non-Disney animated features like The Secret of NIMH, The Land Before Time, All Dogs Go to Heaven, Thumbelina and Anastasia.

Fievel Mousekewitz - The main character who is always getting into trouble. At first I really thought he was voiced by a woman which I would say is pretty common in animation. In fact he was played by Michael Glasser who unfortunately hasn't done a whole lot since the American Tail series.

Henri - A French pigeon who befriends Fievel while overseeing the construction of the Statue of Liberty. Henri belts out a quick little number and we know he can sing because he's voiced by Christopher Plummer. If you don't remember who he is, rewatch The Sound of Music and I'm sure you'd pick him out.

Tiger - A friendly and vegetarian cat who seems to love mice but puts on a facade amongst the other cats. Tiger was played by the late, great and lovable Dom DeLuise.

Sadly, the other cast members are relatively unknown so I won't bother mentioning them.

The reason I decided to watch this movie was because it was referenced by two different sitcom episodes I watched yesterday.

The first was from the episode Environmental Science from the first season of Community.

The second was from this week's episode of New Girl, Zooey Deschanel's new sitcom which seems decently promising.

So if you want a happy trip down nostalgia lane give this movie a watch again.