Movie of the Day - Hard Candy 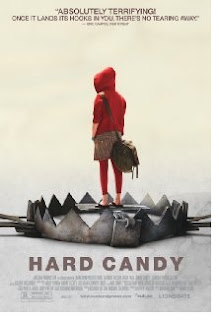 I watched Hard Candy (2005) a little bit after Juno came out, when I was interested in seeing what Ellen Page had done in the past.

This movie is a psychological thriller and it is absolutely creepy, terrifying and by the end it of it all it definitely makes you think.

In this film, 14 year-old Hayley Stark (Page) has been talking to and flirting with Jeff Kohlver, a thirty-something photographer (and pedophile...I mean we can just assume that from the start), for a few weeks on the internet. Normally this is a terrible idea for young teen and what's worse, she agrees to meet him. After their initial meeting at a coffee shop, this naive girl suggests going back to his place to spend some more time together. This is where things get intense and where we learn she isn't quite as innocent as she appears.

I don't want to say any more because it might ruin the viewing experience for you, even if you can already guess the gist of what's going to happen.

This movie was rather low-budget at just under $1-million but when the two main characters are the only ones in the film it definitely helps. Hard Candy only has around 10 minutes of music in its entirety, which helps add to the tense mood throughout the film.
Now the film's two stars Ellen Page and Patrick Wilson (who plays Jeff, our creepy neighborhood pedophile) seem to work well on-screen together; exuding some sort of, I wouldn't say chemistry exactly, but something about the pair seems to work. Wilson plays his part well, he makes the audience want to see him get what he deserves. Page plays the innocent role well, she just has that kind of appearance and personality and not only will she look like a teenager forever, she was just 17 when she made this film. Page sports a pixie-ish haircut which honestly makes her look so much younger and a little bit weird but in this role it works out. Also there is a short cameo by Sandra Oh, who agreed to the role because she wanted to work with her fellow Canadian actress.

I am pretty desensitized to movies and television these days (a byproduct of growing up with 90's entertainment) but this film still gives me the creeps whenever I watch it. It's not a movie to buck up your mood, but it has a strong message and will make you think a little. If you're interested go check out the movie or test maybe just test the waters with the trailer.