Movie of the Day - That Thing You Do!

I saw this movie a long time ago, probably pretty close to when it first came out. I'm not sure what it is but this movie just does it for me. I'm probably not going to write too much about this one but I'd definitely recommend you check it out. 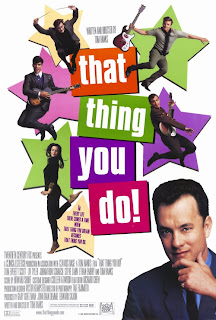 That Thing You Do! is a comedy-drama film writing and directed by Tom Hanks. The story follows a young group of teen sensations from Erie, Pennsylvania in the 60's who have a hit record climbing the charts and are the biggest thing since the Beatles.

This was Hanks' directorial debut into feature film and in my opinion it was a pretty good one at that. This film was a big stepping stone in a lot of young actors' careers.

We also see a lot of references to the Beatles and the Apollo space program throughout the film (Since Hanks played Commander Jim Lovell in the 1995 film Apollo 13). See if you can catch them all.

Tom Everett Scott as Guy "Skitch/Shades" Patterson, the drummer. Immediately got roles in An American Werewolf in Paris and Dead Man on Campus after this film came out. He's been bouncing around the business a lot since then and has had a few stints in a couple of TV series' most recently in the TNT cop series Southland.

Liv Tyler as Faye Dolan, Jimmy's girlfriend. She had already starred in 1995's Empire Records but it definitely solidified her as one of Hollywood's leading ladies.

Johnathon Schaech as Jimmy Mattingly, the lead singer and song-writer. Didn't get many big roles after this film but has had some pretty solid work that I'm sure he can't complain about.

Steve Zahn as Lenny Haise, the guitarist. Granted he's been in a lot of 'stupid' movies since but at least this film really got his foot into the door of show-business.

Ethan Embry as T. B. Player. This character is great because he doesn't even have a real name. He's simply referred to as 'The Bass Player' throughout the entire movie. Although he isn't quite as successful as some of the other big names in this film, he would later star in the 1998 teen romantic-comedy Can't Hardly Wait.

Charlize Theron as Tina, Guy's old girlfriend in Erie, PA. It wasn't a big role but it was one of her first feature film roles. She would later get her break and star in movies like Disney's Mighty Joe Young in 1998.

Obba Babatunde as Lamarr, the hotel owner and concierge.Another under-appreciated actor but he does well with what he's given.

Giovanni Ribisi as Chad, original band member before he broke his arm.


There are a few nice cameos in this movie from the likes of Peter Scolari, Bryan Cranston, Kevin Pollak, Clint Howard (Ron Howard's younger and uglier brother) and from his wife Rita Wilson, and his kids Colin and Elizabeth Hanks.


A lot of good music if you're into 60's pop, and if you're not well...that's unfortunate. The title song actually got nominated for an Oscar. In any case a solid movie and it's a nice watch on a lazy Sunday afternoon such as this one.