It took a little bit for me to get started on this but I really need to get going if I'm going to get this list done by Christmas.

So by no means is this only my 25th favourite it just happens to be on the bottom of an approximate list. 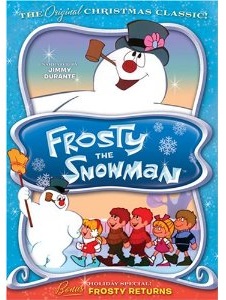 You should all know this one. It is actually a TV special and first aired in December, 1969. At roughly 25 minutes long it's not much longer than most weekly television episodes, but it still does the trick. I loved watching this special growing up it was nice and concise, and made you feel like going outside and building a snowman. It would also make you feel sad that your snowman didn't come to life and dance around.

This heart-warming TV special follows a group of school children who use a magic top hat, discarded by an over the hill magician (Professor Hinkle), to bring Frosty the Snowman to life. Frosty befriends Karen, a young schoolgirl, and they proceed on an adventure to the North Pole whilst trying to stop the greedy Hinkle from stealing the magic hat.

I could tell you the rest of the story but I'm sure you already know it. If you don't you can probably find the whole thing on YouTube.

The cast won't be particularly interesting since this special aired about 20 years before any of people reading this were born. That being said the woman who voices Karen is June Foray (believe it or not she's still alive, and just about the only one of them who still is). June is a legendary voice actress and you might have heard her most notably as Granny from Looney Tunes, Cindy Lou Who, and both Rocky and Natasha from The Rocky and Bullwinkle Show.

Romeo Muller wrote the screenplay along with screenplays for some other classic TV specials like Rudolph, the Red-Nosed Reindeer (1964) and Santa Claus Is Comin' to Town (1970) both of which are coming up as I countdown the rest of my list.