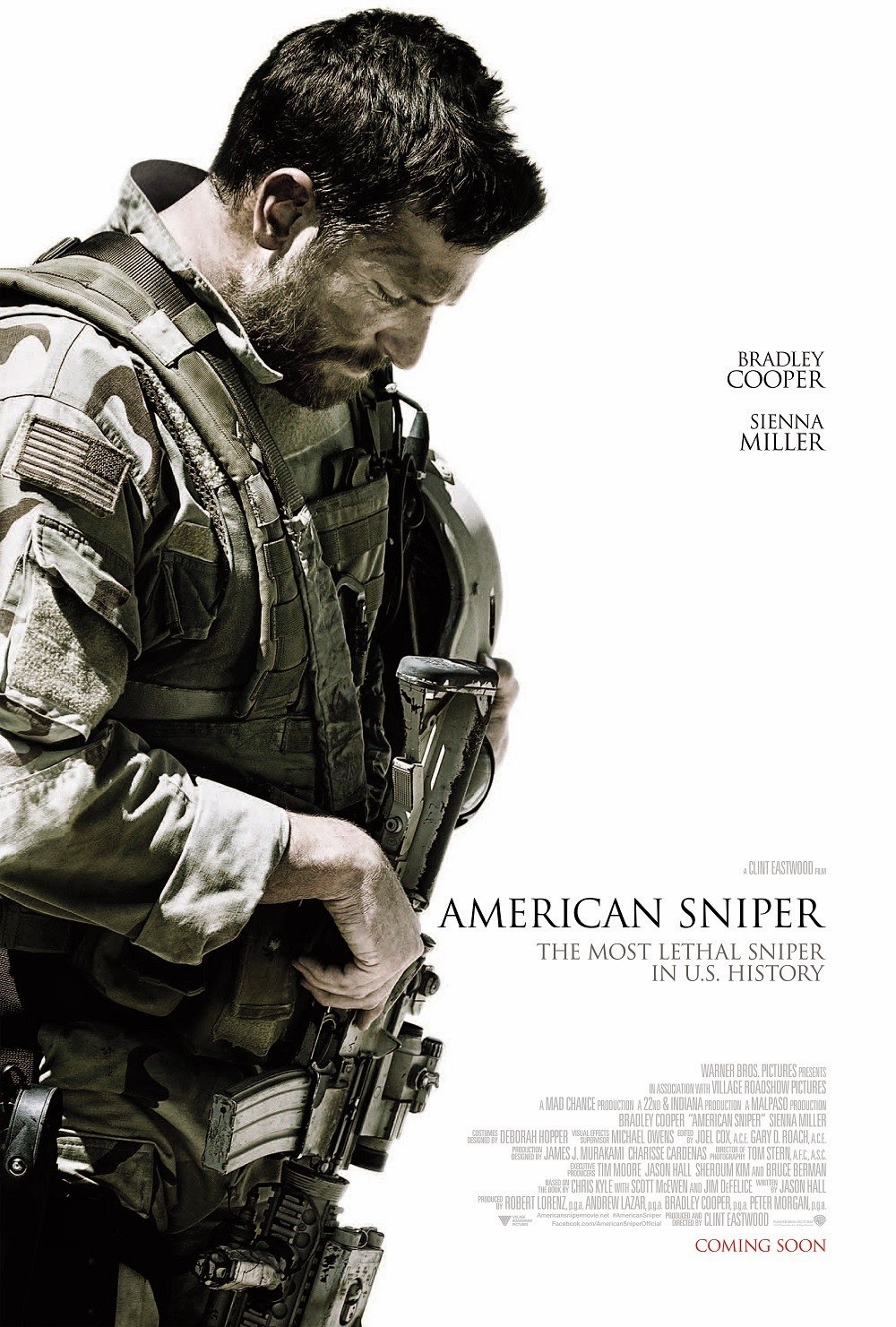 I'm on movie two of five on my race to the Oscars. I have to pick up the pace if I want to make it in time.

I liken Clint's message to Chris' younger brother Jeff. Jeff pops up a few times in the movie at critical junctures. Jeff is with Chris when he makes the decision to enlist in the Navy. He is at Chris' wedding right before Chris gets shipped off to Iraq. He eventually gets shipped out as well. Jeff appears again, now down trodden and clearly defeated when Chris returns for Tour Two. The exchange between the two brothers is almost hard to watch. Like Clint's message, the brothers' relationship is quite subtle. You don't see them interact normally after the first five minutes.

Jeff is overshadowed, beaten down, and a character you mostly don't care about. That is what happened to Clint's message. Most of the film is very black and white but the family scenes are supposed to be right smack in the middle of the grey but they aren't long enough to get that feeling from them.

Here is the spoiler-free super lazy version of the plot:

Chris Kyle is 30 year old piss poor excuse for a cowboy. After the 1998 embassy bombings he enlists in the Navy and is trained to be a SEAL sniper. He marries the beautiful Taya (Sienna Miller) and has two kids. Sadly, he is away from his kids most of the time because is busy shooting countless terrorists. His marriage and family life is a struggle because he can't leave the war behind even when he is home.

The brevity of my summary is no disrespect to the man, it is simply out of laziness.

Bradley Cooper has had a great three years bagging three consecutive Oscar nominations. He has had some stiff competition losing against Daniel Day Lewis' Lincoln in 2012 and to Jared Leto in Dallas Buyer's Club just one year ago. Unfortunately for Bradley, the third time is not the charm. I can't be so sure but even if Eddie Redmayne doesn't win, there are a few other obstacles on Bradley's road to meet Oscar.

Don't write off Sienna Miller because although she may not meet Bradley's performance, she isn't far off. I think I formed a negative opinion of her after she played such an awful person in Stardust but she really does a fantastic job at making me like her again. Her scene at the movies close, when she is staring through the crack in the door, seemed really heavy handed but that's not her fault.

Some of the special effects looked clumsy and cheap and it actually made me laugh. Some grenade explosions look like what Freddie Wong would use in his action scenes. There is nothing wrong with that when you're making an exaggerated action scene in a five minute YouTube video but when you spend $60 million on a film you really have to make sure those effects are on point. I didn't like the CGI and slow-motion around Kyle's bullet in the climax but watching it a second time it isn't so bad.

I do want to say that while I am very adept at turning my brain off and suspend any disbelief and just enjoy a movie, having almost Iraqi person in the film be a terrorist was not a great move. I thoroughly enjoyed it regardless but it was something I noticed it and that detracts from the experience. Despite my nit-picking and the real lack of family coverage in the film (which is the point, I guess) it was a very good movie. The acting from the two leads was great but I think I would have nominated Ralph Fiennes over Cooper because I'm weird like that.

Check out The Grand Budapest Hotel and other Oscar nominees if you haven't already. You're running out of time!