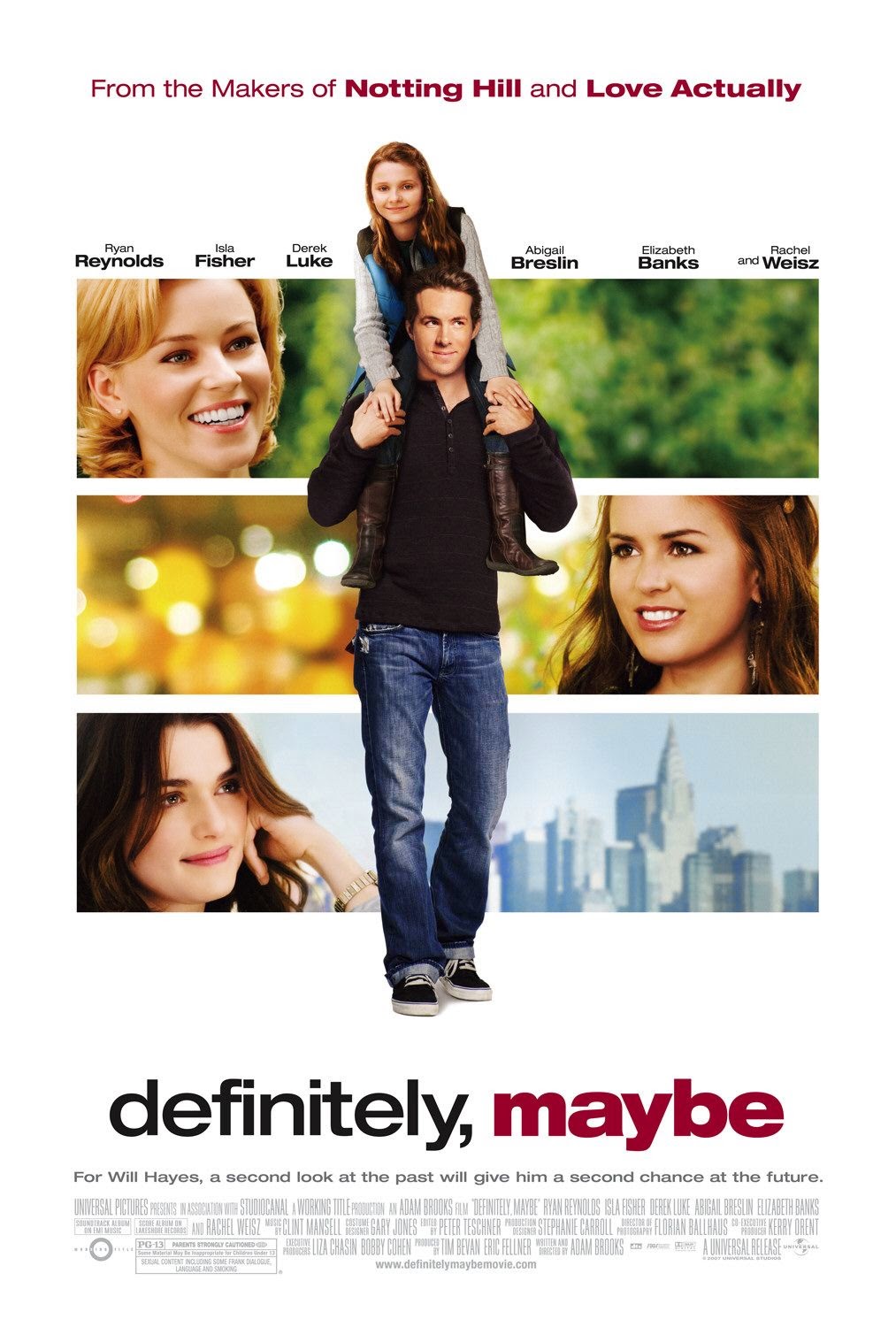 We're creeping up on Valentine's Day and I hope you're not lactose intolerant because everything is about to get a little more cheesy.

For us single people out there it's best not to feel jealous or envy those couples around us. It's a time for blissful ignorance and naive optimism. I know being in a perpetual dream world is a dangerous thing but us dreamers can spend a few days out of the year to get our heads stuck in the clouds like only we can.

If you haven't seen Definitely, Maybe yet you're missing out on a exceedingly handsome "regular guy" dating three amazingly stunning "regular girls" and then telling his daughter the story so she can figure out which one her mom is. If that isn't tagline worthy, I don't know what is.

To give a bit more detail Will Hayes (Ryan Reynolds) is asked by his daughter Maya (Abigail Breslin) how he met her mother. The year was 1992 and Will, fresh out of college, moves to New York to work on Bill Clinton's Presidential campaign. During his time there he becomes close to April (Isla Fisher), apathetic politically and trying to find her calling in life, and journalist Summer (Rachel Weisz) all whilst trying to maintain a relationship with his college sweetheart Emily (Elizabeth Banks). He gets into all sorts of trouble and in present day tasks his daughter in guessing which character her mother is.

I maintain my opinion that this movie is cute and has great actors but is a bit too cliché making it seem at times like you're being force-fed a story rather than being told one.

Most of the supporting cast is great but severely underutilized. Sadly, character development is one of the sacrifices in film over television. Abigail Breslin is adorable but alas, she peaked too soon. After Little Miss Sunshine it was pretty much downhill from there. Thankfully this role slotted nicely into her highs before what some considered cute and charming as a kid became annoying and tedious as she went through her teen years.

I have spent some time talking to various people about the similarities between Definitely, Maybe and How I Met Your Mother. I really did love HIMYM but it simply took too long for Craig Thomas and Carter Bays to get to the point and those who were still around were left asking "Are we there yet?".

WARNING:
I'm going to start getting into some spoilers for both the movie and How I Met Your Mother so if you haven't seen them...EVERYONE DIES!!! Muahahahaha.....ha....ha....

Okay that doesn't happen but seriously spoilers ahead.

To parallel Definitely, Maybe let Ted replace Will Hayes for our male lead. Swap in Robin for April, Stella for Summer, and (this one is more indirect but bear with me) replace Emily with a combination of Victoria and Tracy, and you have yourself Definitely, Maybe with the HIMYM cast.

If you don't know the characters I just referenced, watch nine seasons and a movie and get back to me.

I'm not certain which writer(s) came up with the story first but they are shockingly similar. Carter and Craig filmed the ending of the series around 2008, ultimately sealing their fate, but who knows how long they had been sitting on the complete story. Adam Brooks directed the aforementioned movie in 2008 but again it's difficult to pin down when that written story unfurled.

In any case, if you want to summarize How I Met Your Mother or flush out the characters and story in Definitely, Maybe just swap the cast back on forth and voila!

In any case I'll have to give the nod to Definitely, Maybe because they approached the ending with a little more fluidity and tact doing so in about 75 hours of content less. It's not the most surprising of stories (April even says the words "Definitely, Maybe" in the movie) but it's fun and nice to look at for obvious reasons.

Notes:
- I started to ramble and I don't really know what the point of this post was in the end but enjoy.