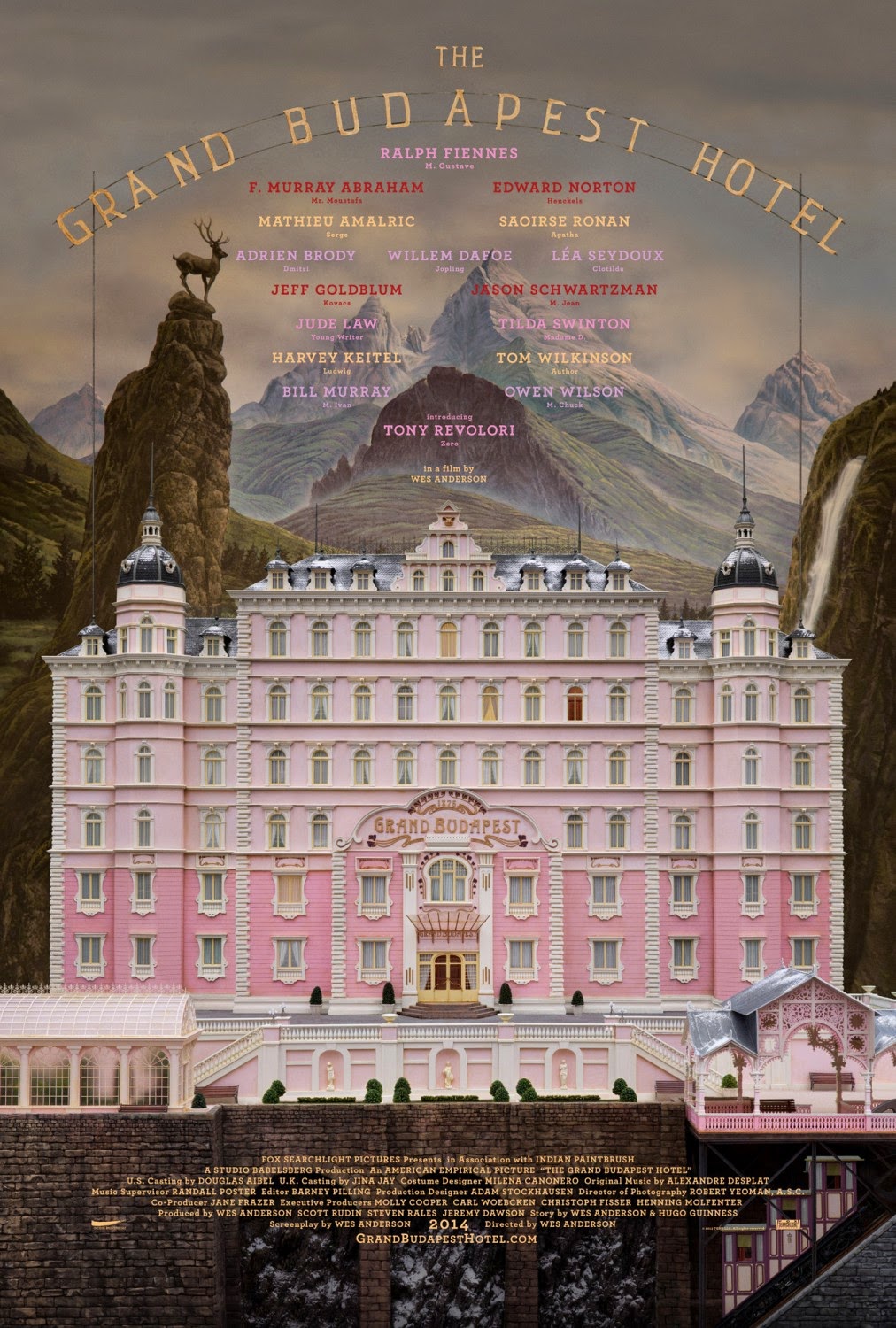 Having seriously lagged behind and viewed only three of the eight nominees for Best Picture this year, I have embarked on the quest to enrich my film palette before this Sunday's festivities.

Today's undertaking was a wonderful surprise in terms of entertainment value. Why I ever had anything else in mind is beyond me but more than a year after it's release I have finally watched The Grand Budapest Hotel.

I admit I am not I am a simple novice when it comes to Wes Anderson films, so most of this review will be misinformed and naive.

If you have read any of my posts in the past you know that my summaries of films are shoddy at best. This film is so quick and filled to the brim with plot points and brilliant characters in just under 100 minutes that I shouldn't even try. Unfortunately for you, I will try anyway.

In present day, a young girl comes to visit a cemetery in the fictional country of Zubrowska. She has come to pay respect to The Author, the man who wrote a novel about The Grand Budapest Hotel in 1985.

She starts reading and we see The Author starting to recount his tale. The Young Author, begins his acquaintance with the titular hotel in 1968. The hotel at this point is run down and nearly abandoned apart for only a few solitary guests and unmotivated workers. One day during his stay at the Grand Budapest, The Young Author asks about a strange man who arrived at the hotel. This man, Zero Mustafa, turns out to be the proprietor who invites The Young Author to listen to his story.

Zero's story starts in 1932 when he started work as the Lobby Boy under Monsieur Gustave H., the devoted concierge of the Grand Budapest.

Sadly, this is where I must leave you in terms of story. I gave you an overview of the first two of seven parts to the movie. Firstly, I don't feel it would be fair to rob you of the joy of watching the story unfold. Secondly, if I summarized the whole movie it would probably take another thousand words or so. Lastly, I just don't want to do it.

In terms of story and comedy, this is my favourite movie of 2014, but it also provides so much more than that. I loved the technical aspects of the film. I loved the camera work as it captured the intricacies and the crisp meshing of how each scene flows. Every last detail is so deliberate and that is why it was so entertaining for me. Also, the comedic effect of moderately used and perfectly timed profanity is seriously undervalued. I have an inkling this is true for all Wes Anderson movies but I cannot for the life of me remember in my clouded memory of way too many movies.

The duo of Ralph Fiennes and Tony Revolori (Monsieur Gustave and Zero respectively) really accent an already great story and visually beautiful film. I won't bother listing the cast because its length is unsightly. Instead, I will say most were well used but there were only a couple that I didn't think were quite on point in their given roles. Ed Norton is a very capable actor and I enjoy many of his roles but he seemed to pull me out of my immersion into the story. I can't quite explain it but after his first scene I was hoping he wouldn't be a frequent player in the narrative. You might have guessed that I guessed wrong. The second actor that seemed a bit off to me (which is difficult to say since I have an almost unhealthy obsession with her) is Saoirse Ronan. She played Zero's love interest and it wasn't anything she did to stifle my enjoyment. It was her accent that threw me. I had not seen a single role in which she uses her natural Irish accent until this one. I have heard it many times in interviews, it is beautiful, but it seemed out of place amongst the other characters. Although her native Irish had me slightly perturbed, I hope you enjoyed her performance as the lovely Agatha.

Such a quick, clever, and well made movie in every facet it seemed longer than its sub two hour run time, in a good way. When the story came to a close it was bittersweet because it was a fantastic journey but I genuinely wished to see more. The movie runs fast and it is complex but not so much that you won't be able to follow along. It provides just the right amount of complexity to be comical from start to finish.

It really was a pleasure to watch it and I hope on my next watch the few odd issues I had with it will have ironed themselves out. I also hope it stands up on subsequent viewings because I plan on many to come.

Notes:
- I probably should have (re)watched some of Wes Anderson's previous work but I didn't. If you have been equally neglectful you should check out a nice Beginner's Guide to Wes Anderson movies.
- Harvey Keitel is looking intimidating as always but at 75 he's looking a little saggy around the everywhere.
- Willem Dafoe is the maniac we all know and love and I love it. I was hoping for his creepy wide grin though but stoic and menacing works well too.