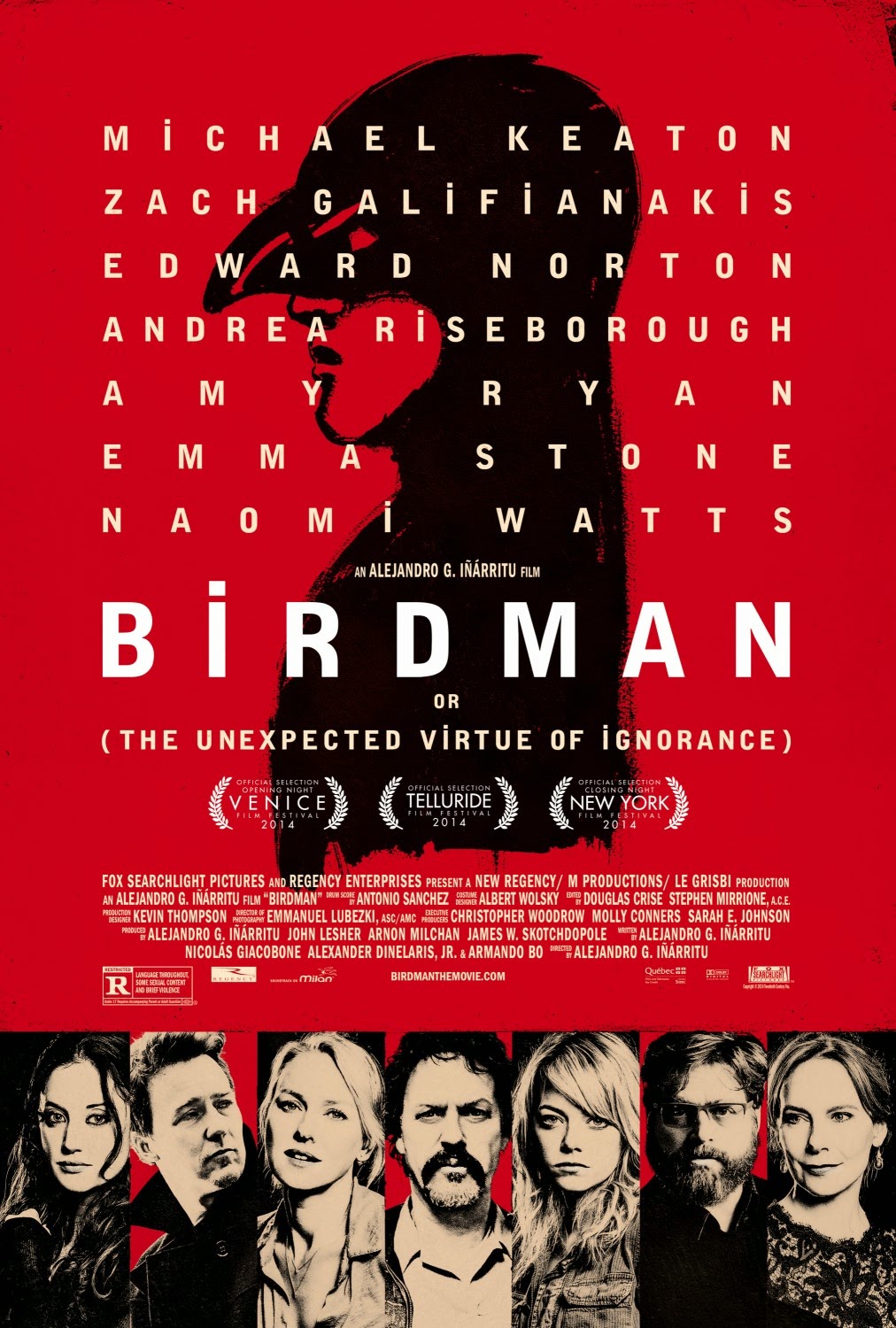 I felt that Birdman was as good as the sum of its parts but nothing more.

I see traditionally shot films as an amalgamation of scenes coming together to tell a story. The scenes themselves are useless out of context and thus those films become more than the sum of its parts.

Since Birdman was filmed to look like one long scene it meant the characters and sets made up sections of one large sum. I'm not saying that's a bad thing, because it isn't. In this case, the aesthetic director Alejandro Inarritu (sorry for any missing accents) went for is really helped by the style of cinematography and editing.

Riggin Thompson (Michael Keaton) was Birdman (an allusion to Batman, but you all know that so we can move right along), a comic-book adapted to a few big screen blockbuster hits. Over twenty years later he is struggling to try to find his footing. He has financed, written, directed, and is starring in his own Broadway play. It seems that Murphy's Law is in effect and nothing can go quite right, but that's what previews are for. From his venomous interactions with castmate Mike Shiner (Ed Norton) to his failing relationship with ex-wife Sylvia (Amy Ryan) and daughter Sam (Emma Stone), his personal life is a mess and he is falling deeper into his spiral of psychosis that metastasizes into Birdman walking around telling Riggin what they need to do.

Keaton is outright insane and I loved every minute of it. Now that's nice and succinct for you.

Ed Norton plays a great asshole and I really don't care about him at all, that is why it was wonderful. Amy Ryan, Zach Galifianakis, Andrea Riseborough, and even Emma Stone are all mainly ancillary but Naomi Watts is what I have to talk about most with the supporting cast.

I didn't like her, to be fair I never really do, but she overacted. She is playing a "young" woman who has dreamt of being on Broadway and acts like a child when she thinks of it slipping through her fingers. Naomi will be 47 later this year and she acts less than half her age. Amy Ryan is the same age and her character is the mother of another adult character in the movie. Yes this is Hollywood, but it's time to move on and embrace the mom roles now Naomi.

Antonio Sanchez provides a fantastic jazz drum score that was brilliant and not unlike another Oscar nominated movie, Whiplash. Unfortunately for him and the film, the Academy deemed him ineligible for the Original Score category, for which Birdman was nominated at the Golden Globes, due to the effect the classical music portion of the score had on the film. I think that is total hogwash and even after an appeal they just have to live with it.

I was going to say at the top of this post that the one take look of this movie is very reminiscent of Alphonso Cuaron's style. That is because Birdman cinematographer Emmanuel Lubezki often works with Cuaron and is responsible for cinematically notable films Children of Men and Gravity, for which he just recently won the Academy Award. I see gold in this man's very near future as he is nominated again for Birdman. Along those, lines the editing was very clever but from the sheer number of transitions, the quick cut to and from darkness became a little played out.

I loved the story even if it was fairly obvious what the climax would be. Michael Keaton and the way it was shot were the big draws for me. I enjoyed myself the whole way through but ultimately I don't need to watch this movie ever again. For me, it has very little value in a repeat viewing. For those yet to see it, let this movie sink in a little before you move on from it forever. You won't regret it.


Check out The Grand Budapest Hotel, American Sniper, and other Oscar nominees if you haven't already. You're running out of time!