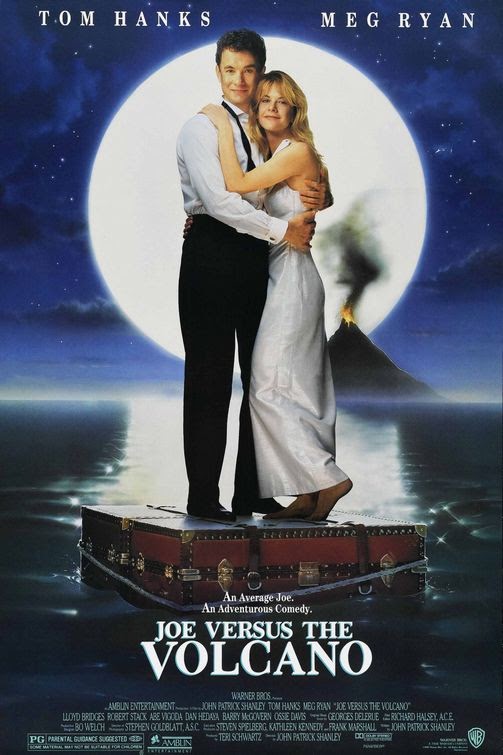 I wrote about Joe Versus the Volcano three years ago around Valentine's Day even though I had never seen it. Things are different this year! Although I'm still single, I finally got around to watching the first of the Tom Hanks, Meg Ryan rom-com trilogy. That's a victory in my books.

Joe Banks (Tom Hanks....yeah that's not a coincidence) is stuck in a miserable dead end job at a medical supply company. He's a hypochondriac and surprise, surprise he's not feeling well. His doctor gives him some bad news; Joe has a brain cloud and only has a few months to live. Joe delivers a beautiful rant (not quite on a Chevy Chase, Christmas Vacation level) to his boss and quits.

He is approached at his home by wealthy businessman Samuel Graynamore who needs him for a special task. In exchange for a special mineral on the island of Waponi-Woo, Joe is to jump into the island volcano as a sacrifice. Obviously, Samuel will give Joe all the luxuries in the world leading up to his fated day. So Joe decides to take the leap.

For about 20 minutes in the middle, after he meets Mr. Graynamore but before he heads to the yacht, it is a totally different movie. It feels like a long montage that could be lifted straight out of Big, had Josh been a little more mature and had more money. Once on a yacht to the island, everything takes a strange turn and what I thought to be a dream sequence (which they hinted at heavily) is just the last third of the movie going off the deep end. To parallel the movie, the plot, sets, dialogue, and effects all jump into a volcano and melt into a convoluted, stylized mess of comedy. I'm not sure I like how the movie ended but it was certainly interesting and very different. To tread lightly on the spoilers, although it's on the poster, everything ends happily ever after and he ends up with the girl. There is an interesting twist that comes up at the end but little comes of it.

I wanted to write more to summarize the film but I found it difficult to do so. Although the movie paces slowly through its first hour, it becomes so hard to describe towards the end. In terms of tone, it has a cartoonish, goofy quality. The intro sequence fantastically encompasses the misery Joe is feeling and for some reason I can picture it in claymation. The middle section of the movie was the most out of place being the most normal. Towards the end, I wouldn't have been surprised if cartoons started to walk around with the actors Who Framed Roger Rabbit style. With all this mess I always love the use of great actors in small parts, bit parts, and cameos even if some of them are underused.

Robert Stack, with the wonderful voice as heard on Unsolved Mysteries, comes in as Dr. Ellison, Joe's doctor. Lloyd Bridges (father of Jeff and Beau) is fantastically wacky as Samuel Graynamore and I liken his character to a combination of Doc Brown and Willy Wonka. Dan Hedaya is sadly typecast as the most annoying man in existence, other than Gilbert Gottfried, but he works it well as Joe's boss. Ossie Davis is Marshall, Joe's limo driver. Amanda Plummer plays Dagmar, a tragically negligible role on the yacht. We also see Carol Kane as a hairdresser in a role so short it's almost criminal. Once on the island it's hard to pick out who anyone is but we see Abe Vigoda and Nathan Lane playing natives, because as it's explained in the film, the island was partially colonized by Jews.
Believe it or not my favourite part of the movie was watching the performances of Meg Ryan. Meg does her best Mike Myers or Eddie Murphy impression (although I guess at the time it might have been a Peter Sellers impression) and plays the ditzy Dede, spoiled and lost Angelica, and somewhat normal Patricia. Her performances with Dede and Angelica are so over the top but it fits the movie. I flat out enjoyed it, laughing every time she spoke.

All in all a very strange movie. It didn't look polished enough to warrant a the big-budget price tag and the pacing was all wrong throughout. Nevertheless it ranks as one of the more enjoyable Meg Ryan performances as long as go in with no expectations. I thought it was cleverly made but had it been 20 minutes shorter it could have run smoother and tighter. Joe Versus the Volcano is certainly enjoyable and something you and a special friend can watch, discuss, and even rip apart this Valentine's Day.

Notes:
- Poster image obtained from www.impawards.com
- I got the picture of the Meg Ryan trio from a great blog, Rock Love Austin, on a variety of subjects but the fact that they have an entire Tom Hanks section is a great.
- Taking $25 million to make and only recouping $39 million at the box office it was considered a flop despite some critical appeal, most notably a 3.5/4 star rating by Roger Ebert
- It had a higher budget than box-office hits of 1990, Home Alone and Teenage Mutant Ninja Turtles.
- A fun theory that I thought of independent of the millions of people who have probably done it before me is that Joe died on the yacht from a real illness. The "dream" is him going to the afterlife and the moon sequence, you'll know it when you see it, is him really meeting God.