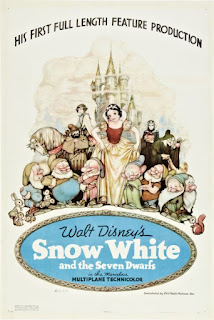 I've really been slacking with pumping these out so from now on I might try these lists a little differently.

You may or may not have seen this one coming. I definitely knew it would be #1 before I saw the Top 10 list. It is personally not my favourite but you really can't ignore what it did to the entire film industry. Snow White and the Seven Dwarfs (1937) was Disney's very first feature length film and revolutionized the world of cinema.

Snow White is a spoiled little princess whose jealous Queen sends a huntsman to execute. Snow White screams and whimpers as she runs off and finds herself at the home of the Seven Dwarfs. Things were different back in the 30's so Snow White may not line up exactly to the qualities that may be found particularly appealing in women today. Her voice is annoyingly high, she has the fairest of skin, she is super naive, and her only discernible abilities (other than singing) are to cook and clean. Now back then this probably would have been the perfect woman, but nowadays it would pretty much represent most of what women want to break away from. In any case, as much as I don't like about the original Disney princess, the film deserves to be at the top of AFI's Top 10 Animation. It was a great movie that changed animation in film forever.

With this year's Mirror Mirror and Snow White and the Huntsman we will see some different re-imaginings of an old classic. They each take a different perspective on the story with the latter being the darker, and probably more realistic take on the story. If you know anything about the original Grimm tales, you know they were exactly that, rather grim.

The Seven Dwarfs are the main stars of the film and because of them in my opinion, this film will always merit another viewing no matter your age.

Notes:
- Walt Disney received his second Academy Honorary Award (the first in 1931 for creating Mickey Mouse) in 1938. He was presented a full sized Oscar statuette along with seven miniatures.
- A couple times throughout the film the dwarfs exclamation of "Jiminy Cricket!" alludes to Pinocchio's conscience that would appear three years later.