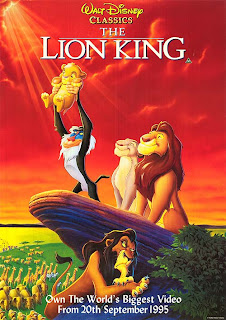 The Lion King (1994) easily has one of the most iconic scores and soundtracks of our time, and by "our" I mean those that are my age. I'm sure I'm not alone in this but I know when I watch it and the songs I grew up with come on, I start belting them out or lip-syncing like an idiot.

Sir Elton John and Tim Rice (who usually doesn't get enough credit), provided us with some of Disney's greatest songs for this film. Can You Feel the Love Tonight,  Circle of Life, Hakuna Matata, I Just Can't Wait to Be King, and every other song in the movie. Okay well it was every song other than the instrumental ones, which were done by Hans Zimmer. Lyricist Tim Rice was asked to write the songs after he had written with Alan Menken for Aladdin, but Menken was unavailable due to other projects. Rice ultimately was able to work with Elton John after suggesting him to the producers.

We hear from some amazing voices that you may or may not have associated with the movie before: James Earl Jones as Mufasa, Matthew Broderick as Adult Simba, Jonathan Taylor Thomas as Young Simba, Nathan Lane as Timon, Jeremy Irons as Scar, Rowan Atkinson as Zazu, Cheech Marin as Banzai, Whoopi Goldberg as Shenzi, and the great Robert Guillaume as Rafiki.

I talk about all this stuff before actually talking about the film itself because I know you've all seen it before and by the off chance you haven't you know what it's about. If by some minute, infinitesimal chance you haven't seen The Lion King or don't know what it's about, I'm not sure why you're reading a blog about movies in the first place. In any case, Simba's journey from being privileged, going through hardships, finding himself again, and taking back the land that is rightfully his, is definitely an inspiring one. He has his childhood friend Nala throughout some parts, and meets the epic duo of Timon and Pumbaa when he leaves the Pride Land.

I'm not sure if there is a bad time to watch The Lion King. Some might think that watching it after you have lost a loved one may be a bad idea and they might be right. However, I'd think that after an appropriate grieving period, the message that this movie sends about our loved ones always being with us even after they have passed, is one of hope. Besides, what better than crazy antics from anthropomorphic safari animals and Disney songs to bolster one's spirits.

Notes:
- Legendary German composer  Hans Zimmer won his only Academy Award for Best Original Score for The Lion King. Honestly, if you've seen how many amazing films he has worked on you'd think a single Oscar is a snub.
- Can You Feel the Love Tonight,  Circle of Life, and Hakuna Matata were all nominated for Best Original Song, with Can You Feel the Love Tonight ultimately winning.
- Disney adamantly denies they based any of The Lion King on the Japanese cartoon, Kimba the White Lion. They say that any similarities between the two were purely coincidental. I say that is some major BS but that's just my opinion. I mean the story and screenplay are entirely different but some of the artistic aspects of the film are strikingly familiar.
- The Simpsons made a joke about the similarity between the two films briefly in the episode where Bleeding Gums Murphy died. If you know your Simpsons moments, you know what I'm talking about.