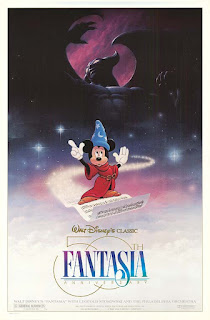 Of the 10 films on the animation list, Fantasia (1940) was the only one I hadn't seen before. I mean I had seen snippets but that doesn't really count.

Disney tried to break the boundaries with this film and did so in epic fashion. Fantasia combines classical, orchestral music and Disney animation to create a unique, mind-blowing experience. You also need to put into perspective that this film was released more than 70 years ago so just imagine the impact it had back then.

Fantasia is a lot longer than most Disney films at 124 minutes and it crams a lot into that time. When released they actually took a 15 minute intermission because they felt that it was too long to be played in a single sitting. In the version I watched the intermission is still there but they only cut out for like 5 seconds, it'd just be a waste of time if they included the intermission in the video.

Fantasia was written by Joe Grant and Dick Huemer, narration was provided by Deems Taylor, and most of the music heard throughout the film is performed by the Philadelphia Orchestra, conducted by the great Leopold Stokowski. Fantasia was the first commercial to be shown with stereo sound. It was also the first appearance of Mickey Mouse in a feature length film.

I have seen my fair share of films, not quite as many as I would like but I'm getting there, and I'd say that Fantasia is overall the most beautiful film I have ever seen. In terms of plot, acting, and scriptwriting I can't say it does well because it lacks all of those things. But what it lacks in standard movie components, it makes up with the purest audio and visual quality and the uncanny ability to tell a story without words. The soundtrack is simply phenomenal, yes it is all music of the classical persuasion but it was the 40s and a different time musically. I could write a while on all the music featured but just click on one of the "Fantasia" links above and just check the Wiki page for yourself. Let's face it that's all I really do anyways. Not downplaying the incredible music but unlike some I think my favourite part was the vivid and stunning animation, which is still great now but must have been so much more impressive when released. I have probably viewed the remastered and re-polished version but my point still stands that it was an animated marvel. The thing with this movie is that you could literally be blind and still get much of the visualization due to the tones and vivid quality of the music. Narrator Deems Taylor, plants seeds into our imagination from the brains of the artists at Disney.

Now having seen it, I probably would have put it much higher than #5 on the list, maybe even #1, due to its brilliance and innovation in movie making and animation.

With all this praise for the film, I do have some warnings. The film starts rather slowly and it is still long even by today's standards. They fit a lot of stuff into those two hours. If you are going to watch the movie you really have to put aside two hours to do it. Multitasking while watching it is not recommended because you won't get the most out of the whole experience, at least not the first time you watch it. Another big point, if you don't happen to enjoy classical music, then you might not enjoy this film....which is just two hours of it....with cartoons. I would still encourage everyone to watch it, if you don't like it you can still say you've seen it. If you've already seen it, try going back and just listening to it, maybe with your eyes closed and see what your imagination can come up with. If you've done all the above then good for you, you can now go watch something else.

Notes:
- If anyone is familiar with the music played in Professor Oak's laboratory in the first generation of Pokemon games, the first little trill is definitely a rip from the "Chinese Dance" of the Nutcracker Suite by Tchaikovsky, which was featured in the dancing mushroom scene.
- Fantasia did rather poorly in theaters due to disdain for the fusion of Disney animation and classical music, as well as World War II blocking European film markets.
- There are so many different versions, edits, and remasters of Fantasia that it's hard to keep track of.....so just don't bother.
- There is a portion where they have an animated version of Zeus which definitely seems like where they drew their inspiration when animating him in the 1997's Hercules.
- Its sequel, Fantasia 2000, was released on New Year's Eve 1999 to pretty decent reviews but doesn't quite have the lasting effect as the original.