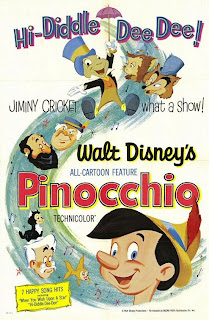 Only if you are brave, truthful, and unselfish can you become a real boy. Those are apparently the only three requirements according to the Blue Fairy. So I thought I knew the whole story of Pinocchio (1940) but this was a perfect example of why you should rewatch movies every couple of years. It was a lot creepier and more disjointed than I remember. Still, it was fantastically made and introduced a couple of Disney's oldest characters.

Geppetto is a lonely old woodcarver who, one day, makes a wooden boy and wishes for him to be real. Well he's not totally alone, he has his cute tuxedo cat Figaro and his goldfish Cleo (who always seems to want to kiss everyone) to keep him company. The Blue Fairy appears at night and makes Pinocchio come to life and appoints Jiminy Cricket as his conscience. Together Pinocchio and Jiminy get into all sorts of trouble.

I found that the plot up to about 50 minutes in is relatively tame and is pretty easy to predict but after that, all hell starts to break loose. After about halfway, some creepy, rich, fat guy 'kidnaps' Pinocchio and a bunch of other little boys and takes them to Pleasure Island to turn them into donkeys. Then Pinocchio has to rescue Geppetto and the others inside the belly of Monstro, the whale. It's just sort of a couple random creepy subplots thinly tied together. Oh and of course everything ends well but honestly the whole last half could have been left out and it would still make sense as a short film.

Another thing I noticed (and hopefully I didn't miss it when I watched it again) is that at no point in the film is there any reference to the rule that if Pinocchio lies his nose grows. It's just something that happens. I'm sure it is stated somewhere in the novel The Adventures of Pinocchio, written by Italian author Carlo Collodi.

The relationship between The Blue Fairy and Jiminy Cricket is a great example of the power women seem to have over men. She uses her extravagant (tasteful) beauty and charm to get Jiminy to do whatever she wishes. So in that respect the movie holds true to reality....unlike the whole magical wooden boy thing.

If you haven't seen it in a while or just not at all, I recommend brushing up with Disney's second ever feature film. The plot doesn't quite have the same innocence as perhaps newer Disney movies do, but Pinocchio is naive and pure enough to compensate.

Notes:
- Won two Oscars, one for Best Original Score and one for Best Original Song, "When You Wish Upon A Star"
- In a scene in 1937's Snow White and the Seven Dwarfs, after returning home from the mine, all the dwarfs (except for Dopey of course) shout out "Jiminy Cricket!" when they see the light on in their home. Though this was the first time the name/saying appeared in the Disney realm, it was apparently used several times in the 1930 movie Anna Christie. I say 'apparently' because I haven't seen it and I took that info off Wikipedia so who knows how reliable that is.