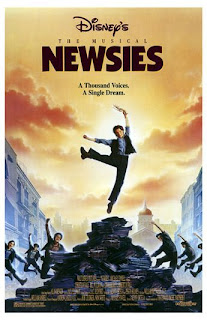 Singing, dancing, wonderful shots of old New York, 18 year old Christian Bale, need I say more? Okay I probably do. Although originally not successful critically or at the box office, Newsies (1992) has gained a major cult following. A live-action Disney musical very loosely based on the Newsboys Strike of 1899 in New York City seems like a rather far-fetched idea but in my opinion it seems to have paid off.

It's not the greatest acting in the world, in reality it's quite awful, especially from the veterans Bill Pullman and Robert Duvall in supporting roles as Bryan Denton and Joseph Pulitzer respectively. The good thing is the quality of the acting is not the point of the movie. Honestly, Disney has never really had to rely on acting because everything else seems to work out. It's the musical numbers and the fantastic and perhaps unrealistic atmosphere in the recreated 1899 New York setting.

Well we open the movie with David (David Moscow) and his brother Les starting work as paper carriers since their father's injury. They quickly befriend and learn the ropes from the legendary Jack Kelly (Christian Bale). When Joseph Pulitzer decides to raise the prices on the newsies, they've had enough and go on strike.  Pulitzer plots and schemes and goes to all sorts of trouble to get his way.

This movie gave  Christian Bale a solid boost to his rising stardom after his great performance in Empire of the Sun (1987). In 1993 he did a rather similar film in terms of singing and dancing in Swing Kids.

If you want depth and brilliant acting this is not the movie to do it. However, if you're into a bunch of kids singing and dancing in 1899 New York then you're in luck! Seriously, though not a great movie, but I'll always love it, it reminds me of being a kid.

Notes:
- Newsies wasn't originally intended to be a musical.
- David Moscow who plays the other main character David hasn't been in much but most notably was the 13 year old version of Tom Hanks' character in Big (1988).
- If you have a keen eye or just have too much time like me, you'll notice that Aaron Lohr plays one of the newsies, Mush. You may not know him by name, but he later played Dean Portman in the latter two Mighty Ducks movies.