Okay so I'm glad I can write about this list now after dying a little inside from writing the other post. Here we come to the Top 10 Grossing Films of All Time if we adjust for inflation. Here is a nice accurate portrayal of what has been popular at the cinemas through the ages. There are actually some great classics on here and we see a lot of representation from different eras. Some may say some of these are overrated because they are classics and they are entitled to their own opinions. They are wrong but you can't blame them for that. Actually yes you can.

I also must add that this is the list from boxofficemojo.com but instead of ranked by Worldwide grosses I'm going by the Domestic grosses. There are two reasons for this:

So without further ado,

Disney's very first feature film and a revolutionary catalyst in animation in the industry. Honestly not my favourite but you can't ignore what it brought to audiences, it was something novel and spectacular. Remember this was released 75 years ago.

A truly terrifying and gruesome experience back in the 70s. When first screened audience members were vomiting in the theaters. I may be horribly desensitized but the first time I watched it I was laughing pretty hard. This and The Shining were pretty hilarious, but that's just me.

One of two movies on this list I haven't seen yet. From IMDb I got this,
"Life of a Russian doctor/poet who, although married, falls for a political activist's wife and experiences hardships during the Bolshevik Revolution."
I'm sure it is far more fascinating than the vague outline described above and I will promptly get to watching it. Alec Guinness is in it and I wouldn't mind watching him in a role where he isn't Obi Wan Kenobi.

The world's best shark movie. Arguably one of the greatest films of all time and very deservedly gets the #7 spot. Jaws really solidified Steven Spielberg's place as one of Hollywood's finest directors and helped the term "blockbuster" newly define a genre rather than how much money it might make. This action-thriller is accompanied by John Williams' minimal but intense score and those two eerie notes we all know too well. 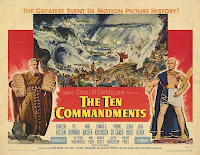 As a kid I always thought it took forever and that it was actually like 10 hours long but I was an impatient child so you can't blame me too much. At a little under 4 hours it is still pretty long but it does star the late gun-lovin' Chuck Heston as Moses opposite Yul Brynner as Pharaoh Rameses. It was nominated for seven Oscars, winning one for Best Effects and it is one of my favourites of the epic genre.

I wrote something about this on my other post and it's the only one to make both lists. So you can read whatever I may have written here. I mean I may or may not have been ripping on James Cameron, I can't really remember.

The first movie I saw that didn't portray aliens as some evil, malevolent beings. It was such a heart-warming story and gave Drew Barrymore her big break. It does help that her godfather is Steven Spielberg.

A great musical telling of a nun falling in love with a widowed Austrian naval officer and his seven children, and general hatred towards the Nazi movement. Who didn't watch this all the time as a kid, it has some great songs and with a lot of kids to choose from there are little bits that almost anyone can relate to. That being said I'd say that it's mostly girls who are 16 going on 17 who get the most out of it. It stars the magnificent Dame Julie Andrews opposite the Canadian, and finally Academy Award winner, Christopher Plummer.

After I had to include The Phantom Menace on that other list I'm so happy that I can now praise the original. A New Hope, is a cinematic masterpiece that started one of the most iconic trilogies of all time. The Star Wars film series is the third most profitable in history behind Harry Potter and James Bond (but they have made 24 films so that shouldn't really count). Most notably George Lucas gave us the Star Wars and Indiana Jones series, all starring Harrison Ford. So kudos to both for some jobs well done.

The oldest film on the list and isn't it much nicer to think about this film rather than Avatar in the top spot? Despite my admiration for older films, I have yet to watch this movie, I just haven't gotten around to it. If only watching every movie was my job; I could totally be the younger, Asian version of Roger Ebert. Anyway, Gone with the Wind is an epic film about the romance between Scarlett O'Hara (Vivien Leigh) and Rhett Butler (Clark Gable) during the American Civil War and the Reconstruction era in the South. It won an astonishing 10 Academy Awards which stood as a record until 1960.

Now wasn't that list much nicer than the one sans inflation? Yeah, I agree.