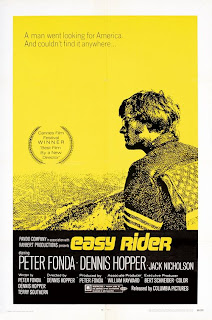 Two bikers ride their Harleys across the Southern states trying to find freedom.....and eventually get to New Orleans for Mardi Gras. Easy Rider (1969) starts with friends, Wyatt (Peter Fonda) and Billy (Dennis Hopper) smuggling cocaine back to the States from Mexico and follows them as the ride off to New Orleans as rich men. Unfortunately no hotel or motel will let them stay because of their appearance, so they often just camp out among the stars. Wyatt is more relaxed and trusting of others, whereas Billy is more cynical and paranoid.

The film is riddled with hippies and drugs and infused with some crazy antics of Jack Nicholson. Jack shows up about halfway through the film as lawyer and local drunk George Hanson. He seems normal, other than his alcoholism, but within a few minutes turns into the good old Jack we all know and love. I mean he's stoned too but that just makes it better.

I found that the cuts between certain scenes were kind of weird but I've never done drugs so what do I know. The acid-trip scene is pretty intense and may or may not be what it might be like to actually be on acid but I could imagine it would relatively similar.

Overall not a lot significant happens for most of the movie but that's the point, it's just about two guys on a journey to find freedom in America. This film boasts a phenomenal soundtrack that covers every mood and tone in every scene throughout the film. Born to Be Wild by Steppenwolf plays through the opening credits and has been tied to motorcycles and general badassery ever since. Watching this movie made me simultaneously both appreciate and envy not living in the 60s.

Notes:
- AFI listed Easy Rider as #84 on their Top 100 American Films of All Time.
- The budget of the film was less than $400,000. The costs for licensing music in the film cost more than $1 million.
- The original working title of the film was The Loners.
- Steppenwolf lead singer John Kay spent his teen years growing up in Waterloo, Ontario.
- Real marijuana was used in the smoking scenes.....the cocaine and LSD in the film was not.
- It's not until about 6 minutes left in the film when Peter Fonda's character's name is actually revealed as Wyatt. Before that he had been only referred to by his nickname Capt. America.
- The two main characters are named after Wyatt Earp and Billy the Kid.