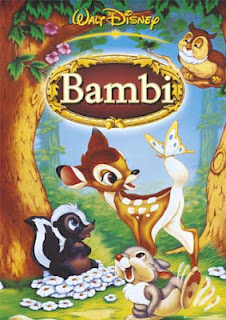 I hadn't seen Bambi (1942) in years but it was a good refresher to watch it again. At 67 minutes it's nice and short so you don't have to stay put for too long.

There isn't really a whole lot that actually happens in this movie. Bambi is born, Bambi's mother dies, Bambi falls in love with Faline, hunters come and destroy the forest, and the creepy Great Prince of the Forest just kind of lurks everywhere. Afterwards everything is fine and Bambi's a dad, The End.

As much as Bambi's mother dying is an iconic moment in Disney film history, it doesn't really have much of an effect on the movie. She dies, and Bambi is sad for like a minute and then it cuts to a happy, bright  scene where he's all grown up. It kind of reminds me of when Simba loses his father but really slimmed down. Imagine it the same except instead of the whole interaction with Scar and meeting Timon and Pumbaa scene, it would have Mufasa dying and then Simba is instantly old. That's pretty much what happens in this movie. Not that it really matters in the long run, I mean she could have still been alive and the rest of the movie could go on just about the same.

Have you ever noticed how annoying Thumper really is? He is basically that kid in school who wasn't meaning to make you feel bad but just always seemed to be pointing out what you're doing wrong and laughing about it. I mean he's cute but if he wasn't a little rabbit you'd probably want to hit him. I just have to say that the adult voices for the animals suck, so enjoy their whiny childish voices for the first 40 minutes or so.

All in all  Bambi (1942) is still a great movie. It has an Oscar nominated score and it was just the sixth feature length Disney film ever made. I just think it's a little overrated, it's a little too short for feature length and the plot is depressing but plays that part down, so why bother putting it in at all? Still a fantastic quality movie but at #3 it's ranked a little too high in my opinion. It's a movie that you won't need to see again but I know that when I have kids I'll be watching it again.

Notes:
- Austrian author Felix Salten wrote Bambi, A Life in the Woods upon which this movie was based. Although not conclusive, it is widely believed that Salten is anonymous author of a rather different book. He is regarded as the author of the erotic novel Josephine Mutzenbacher - The Life Story of a Viennese Whore, as Told by Herself. That`s something to think about.
- This film is also famous for Thumper`s Rule, which states that, "If you can't say something nice, don't say nothing at all", but if commonly misquoted as saying "If you can't say anything nice, don't say anything at all", but it has the same meaning, so no point splitting hairs.
- AFI listed 'man', the off-screen threat to the forest, as #20 on their List of Top 100 Heroes and Villains.