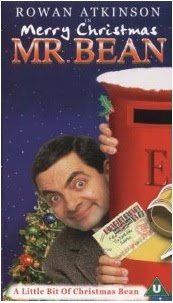 I used to watch a lot of Mr. Bean episodes on CBC when I was a kid and it was good back then and it's still hilarious now. I'm sure there was probably an earlier occurrence of someone getting a turkey stuck on their head on TV or in film but I haven't seen it. Friends did it later in the 90's and I think that episode panned out pretty well.

This was the first time I ever saw Rowan Atkinson as an actor and it was a while before I realized how great of an actor he really is.

Anyway, I don't want to spoil any of it for you if you haven't seen it but Mr. Bean is up to his ridiculous shenanigans once again and the turkey on the head scene is priceless, so just check it out. The episode features Irma Gobb (Matilda Ziegler), Mr. Bean's girlfriend. If you're against going to certain sites to stream, don't worry it's on YouTube. So go check it out. Actually I'll just find it for you, give me a sec....


And there you have it, the wonders of the internet. Enjoy.