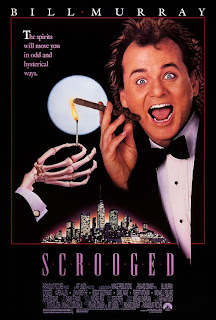 This a hilarious modernization of Charles Dicken's A Christmas Carol, a couple more adaptations of his work will appear later on the list. This movie was made in the wake of the success of Ghostbusters (1984) starring Bill Murray to cash in around the holidays. I mean the tagline of the movie was, Bill Murray is back among the ghosts. Only this time, it's three against one. Which is referring to the ghosts that visit Ebenezer Scrooge in the original story.

Frank Cross (Murray) is a wealthy yet cruel and conceited, television executive. He has been a cold person his whole life and distances himself from his family and his one-true love Claire Phillips (Karen Allen). He is given the job to oversee the live broadcast of a production of A Christmas Carol on Christmas Eve. Unfortunately for him he begins to experience strange occurrences that draw eerie parallels to the story of the show. He is visited by the Ghosts of Christmas Past, Present, and Future and they show him the error of his ways.

Bill Murray is the greatest, he hasn't done a lot lately but in the 80's and early 90's he was pure comic genius. Of course if you've seen Zombieland you know he's still got it. Bill is backed up by a pretty impressive group of actors and actresses in this film. There are plenty of cameos and great supporting parts played by Bobcat Goldthwait, Carol Kane, John Forsythe, David Johansen and John Glover amongst many others. Also, Bill's brothers Brian, John, and Joel all appear in this movie.

It's a great comedic take on A Christmas Carol and Bill Murray certainly spices things up a bit. I love him and he always brings a smile to my face.