I've had a pretty fun time writing this countdown. It's a good hobby to do something, pseudo-productive, but here we are at the end and there is only one question to ask. Which movie has made it to #1?

Well I'm not going to tell you just yet.

Before I get to the main event I have to discuss something rather important. Some of my friends have been pestering me about one movie in particular that had not appeared on the list so far. I had fully expected to give it an honourable mention due to it being my favourite action movie of all-time. My friends kept insisting that it is a Christmas movie however I disagree. I agree that it is a great movie, where some themes may be applied for it to be considered saving Christmas and it is set around the holidays, however I do not consider it being in the same category as some other ones I have listed. We could argue endlessly but this is my list and there isn't a lot you can do about it. The movie I'm talking about is Die Hard (1988). 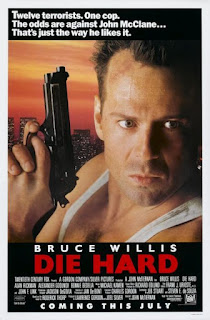 I don't contest that it's a great movie, that's a given, but despite popular belief just because a movie is set around the holidays doesn't necessarily make it a holiday movie. With that being said, every one of these movies on the list were released within a month or two of Christmas, except for Die Hard being released about as far away from Christmas as possible on July 15, 1988. It's not necessary for a holiday movie but it's a good indicator. There is a strong case for Die Hard and I probably would have put it at least #2 if it did qualify but that could be on a list of my favourite movies ever, but I'll get to that later. Nonetheless, I enjoy watching Die Hard at least once a year. Between studying and watching Christmas movies this year I did watch all four Die Hard movies and it definitely made my night. If there are some of you who haven't watched Die Hard, any of them, you simply have to, that's an order. For any people who think it's not their cup of tea, well suck it up and watch it. I had to sit through all of The Phantom of the Opera, so no complaining for you. I have no authority in real life and it's even harder in text, so just imagine me saying it in a stern looking face.


You'll just have to wait a little longer for #1 but I'm working on it.