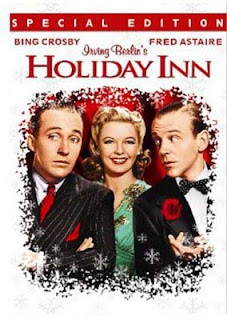 I honestly doubt many of you have ever seen or even heard of this movie. I certainly didn't until about a few months ago. The thing with movies of this era was that the talent level was simply outstanding, not bashing every single actor or performer of today but film was a little different back then.

Jim Hardy (Bing Crosby), Ted Hanover (Fred Astaire), and Lila Dixon (Virginia Dale) make their living singing and dancing together in the Manhattan club scene. Jim and Lila are planning to leave this life behind and go out to live in the country on a farm. Unfortunately for Jim, Lila and Ted have been making their own plans. Jim finds himself living alone on a farm in Connecticut, and life isn't so grand. After recovering from a slight breakdown Jim returns to visit Ted and presents him with an idea, the idea of converting his farm house into an inn. This inn would only be open during the holidays, which Jim thinks is a splendid idea whereas Ted and his agent Danny Reed (Walter Abel) don't seem to agree. Nevertheless Jim goes through with his plan and opens his inn hiring young Linda Mason (Marjorie Reynolds), desperate to get into show business. His inn begins to get more attention than he ever wanted and trouble starts to turn things sour.

You might think that that is too much information and I've given away the movie. Well...you're partly right. Honestly, all of that summary is basically introducing all the characters and roles they play, but on to more important things.

Bing Crosby and Fred Astaire!? You know it. Fred can definitely sing but not nearly as well as Bing and honestly Bing can't really dance all that well compared to Fred. Marjorie Reynolds and Virginia Dale provide great performances both singing and dancing as well as being great romances for both male leads.

Another great part in this movie is first time White Christmas is performed, written by the legend of American music Irving Berlin. White Christmas would go on to win that year's Oscar for Best Original Song.

The hotel chain Holiday Inn was named after this 1942 classic, just in case you were wondering.

Now I easily could have put another similar movie in this spot or even on this list, but for one I haven't actually seen it and two it seems to be basically the same movie just made 12 years later. I'm talking about White Christmas (1954) which also stars Bing Crosby and he performs at an inn around the holidays. There are plenty of differences between the two films but I think too many old movies might be a little too much for some.

But for those who are a little skeptical about watching this movie, here's a little clip to get you into the mood. Remember, it's not Christmas without a little Bing.

Only five days (more like 4) left til the big day!