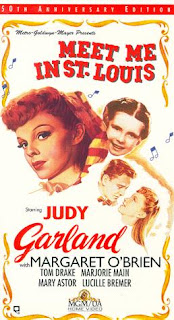 Actors that actually have talent and can sing and dance? That's right we're back in that Golden Age of cinema again. It was a great time where just being attractive didn't quite cut it in films and where today's "triple threat" was nearly a necessity for actors.

This film, rather obviously set in St. Louis, occurs right before the arrival of the World's Fair in 1904. The film follows the Smith family, in particular the four daughters Esther (Judy Garland), Rose, Agnes, and the adorable Tootie (Margaret O'Brien). The story follows the family's trials and tribulations in relationships and in life.

Starring Judy Garland, this musical is simply superb and beats out any "musical film" I've ever seen in our era of film, not that I've seen all that many. Funny enough Judy almost didn't want to do the movie because she though the spotlight would be stolen by one of her co-stars Margaret O'Brien, who was only 7 years old at the time of release. Fortunately, Judy did agree and she did a wonderful job; not only that but Margaret O'Brien actually won the 1945 Academy Award for Outstanding Child Actress.

Meet Me in St. Louis was directed by Vincente Minnelli, who would later marry Garland and they would have a daughter together, Liza Minnelli.

This movie is a little more influential that I had originally thought before actually watching it. This film marks the first occurrence of The Trolley Song, the titular song Meet Me in St. Louis, and the holiday classic Have Yourself a Merry Little Christmas. The Trolley song was nominated for Best Original Song but quite honestly it can't hold up against Judy's emotional rendition of Have Yourself a Merry Little Christmas which gives me goosebumps every time I hear it.

Just the song itself could make even the Grinch love Christmas. There's a little bit at the end that is kind of a spoiler for the movie so just listen to the song then stop. I couldn't get the clip I wanted in here because Blogger seems to not like it for some reason. In any case, enjoy.