I've been busy with end of term work and sleeping so it's taking me a while to get the ball rolling on these things again. Unfortunately, as the most wonderful time of year approaches I find myself in need to start doing these things in pairs. So without further ado here are #22 and #21 on the countdown. 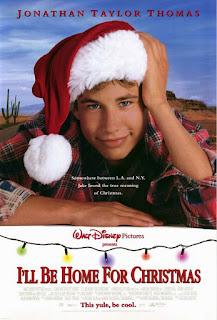 Now by all means this isn't a holiday classic, and it did not do well at the box office nor was it well received by....well just about everyone, but it's one of my favourites of the holiday season.

This is the story of young Jake Wilkinson (Jonathan Taylor Thomas) trying to make his way home for Christmas after one of his schemes backfires and he ends up in the desert with no money and glued in a Santa suit. To top it all off, his girlfriend Allie (Jessica Biel) gets a ride home by Eddie (Adam LaVorgna), a guy trying to steal her from Jake.

Meanwhile, his Jake's Dad (Gary Cole) is waiting for him and offers his son a Porsche if he can make it home in time.

We get a glimpse of Jessica Biel's future in the industry, good for looks but not the greatest actress. Don't get me wrong she's not awful *cough*Megan Fox*cough*, sorry just something in my throat. Oh I guess that doesn't work in text.....meh. She got this part mainly from her "acting" on 7th Heaven which she started in 1996.

This was pretty much the end of Jonathan Taylor Thomas' career though. Probably not due to this movie particularly, but he hasn't done too much that is noteworthy since about 1998, which was also when he left Home Improvement.

LaVorgna actually appeared on 7th Heaven with Biel, with whom he had a relationship for three years.

Now you have to love Gary Cole, he's been around the industry for years in a plethora of different genres but I always associate him with characters you just love to hate. In this case, he actually is a pretty loving father and a nice, normal character which is welcome in this crazy adventure Disney presents us with. If you don't know who Gary Cole is, just go watch Office Space.

Here's another little tidbit of knowledge, although the teens in this movie are supposed to be 18 none of the actors actually were, Thomas and LaVorgna were both 17 and Jessica Biel was just 16, and that's when the movie came out (Although I can't really see there being a lot of post-production time required for this one).

This movie probably could have been nominated for a lot of awards, particularly Razzies....in just about every single category. That being said I found it entertaining and heart-warming due to the excess of cheese and cliche throughout the entire movie. There are some holiday classics you like to avoid watching by yourself because you want to watch them with your loved ones, this is not one of those movies, but I love it. 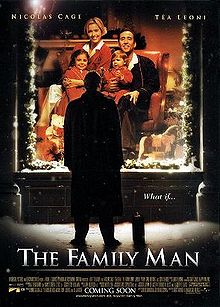 Here is a good wholesome movie that has a great moral to it. A modern adaptation on both It's a Wonderful Life and A Christmas Carol, it does a pretty decent job getting the point across and inspires the holiday spirit.

Jack Campbell (Nicolas Cage), a wealthy New York investment broker, has no real regard for family. After a convenience store incident with a man named Cash (Don Cheadle), he wakes up to find his life completely changed. A life where, instead of money, he chose to start a family with the love of his life, Kate (Téa Leoni).

Some people don't like Nicolas Cage but I enjoy most of his performances. He is often over the top but sometimes over the top actors can be entertaining. Don Cheadle as the guardian angel is brilliant casting. I love Cheadle in his serious roles but I like it when he gets to have fun in his roles too. One actor I didn't mention above is Jeremy Piven who plays Jack's best friend. Piven seems to be forever typecast as the sidekick or best friend, but it's what he does best. Lastly, I do have to say that although she is considerably older than myself I have a celebrity crush on Téa Leoni. It's not that she's hot, which at 45 she definitely still is, but she has a certain quality to her that makes her devilishly charming. I can't really say it any other way than that. She also seems like a really nice person. It's possible that she is a terrible person in real life but I somehow doubt it, although it would make her just that much better of an actress.

This movie doesn't give us anything new but it re-teaches us the importance of love and family and that money means nothing unless you have people to share it with.

So that's the next two down, I think I'm writing too much so I'll try to skim it down for the rest of them.