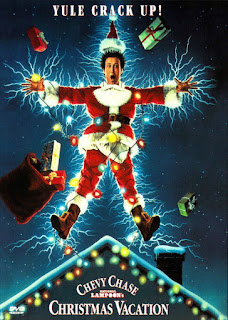 The Griswold family's plans for a big family Christmas predictably turn into a big disaster.

Now this is Chevy Chase at his finest. Some of the less informed viewers might know him best from the NBC show Community, which is awesome but not quite as awesome as some of Chevy's earlier work.

Along to support Chevy in this hilarious Christmas classic are Randy Quaid as the idiot Cousin Eddie, Juliette Lewis as Audrey Griswold, Johnny Galecki (Leonard from The Big Bang Theory) as Russ Griswold, and Brian-Doyle Murray as Clark's boss. There are others but I don't feel like naming them.

There are timeless classics like Caddy Shack and Chase's amazing time on SNL but he is probably best known for his being Clark Griswold in the Vacation films, including the previous two installments Vacation (1983) and European Vacation (1985). There are a lot of reasons to love this movie, but I love it for one particular reason. To be more specific there is one scene that I absolutely love this movie for and it just reminds everyone about the times when they were pushed a little too far and just could not take it anymore.

This is a rather long version of the rant but it gives you some back story to it. Also, YouTube likes to mute a lot of videos that have copyright infringement so this is one of the few good ones that have sound.

Enjoy and make to sure spread the love and try to forget anything that might be angering you around the holidays.