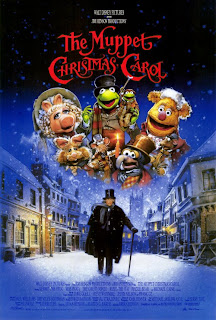 I love the Muppets, if you haven't seen the new Muppets movie you really need to go so it, like right now.

This is by far my favourite film adaptation of A Christmas Carol. It keeps it's 19th century setting and actually follows the story rather closely, other than having various anthropomorphic singing puppets as main characters. Michael Caine provides a pretty decent portrayal of Scrooge but I find that some of the light-hearted parts around the end were a little forced, but I'm pretty lenient so I still enjoyed it. It's not his best work but that doesn't matter, he's having a good time with it. I mean how can you not when you're working with the Muppets. You have to love the Muppet musical numbers and it's nice seeing a comedic and musical spin on a rather dreary yet morally uplifting story.

Kermit the Frog as Bob Cratchit
Gonzo the Great as Charles Dickens
Rizzo the Rat as himself
Miss Piggy as Emily Cratchit
Robin the Frog as Tiny Tim
Sam the Eagle as the Schoolmaster
Statler and Waldorf as Robert and Jacob Marley
and Fozzie Bear as Fozziwig (when the original character is named Fezziwig, Fozzie is really your only choice).

Here is my favourite musical number from the movie.

Although, "Marley & Marley" is a close second just because of Statler and Waldorf.