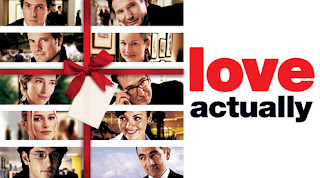 Yes, it's cheesy and tacky beyond belief but it was done quite well considering the star studded cast and how terribly that type of ensemble film can turn out. Yes I'm referring to both Valentine's Day (2010) and New Year's Eve (2011). The British just know how to do it better, plain and simple. It seems that there has to be an American version for just about everything good that is British, although some have turned out pretty well. The ones that come to mind are Whose Line is it Anyway? and The Office. I'm sure there are more but I don`t really care right now. Did anyone see the American remake of Death at a Funeral? It was terrible, the only thing that was different is that they're all black. It was only like 3 years removed from the original film which was far greater. I mean Peter Dinklage played the exact same role in both movies. Anyway, enough ranting about that, back to Christmas stuff.

Love Actually, reminds us about all the different kinds of love in the world. It doesn't have to be romantic love, it can be love of friends and family too. I would give you the whole list of who is in it, but I don't want to. I'll just say that they work together far better than their American counterparts that tried just a little too hard. I do have to say that my favourite character in the whole movie is Rufus, the jewelry store salesman, played by Rowan Atkinson. He's the one who sets things in motion, a guardian angel of sorts. I wish he was in more of the movie but he was only really involved in two storylines which was not nearly enough.

A great holiday film and a romantic comedy to boot. Rom-coms are my favourite movie genre especially over the holidays, unless the movie is Die Hard then I'm cool with that. Funny enough Alan Rickman is in both movies.