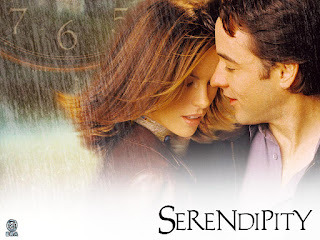 I have my reasons for having this movie on this list and at this spot. First, it's not truly a Christmas movie but it's a theme throughout the film. I wouldn't put just any old movie on this list but it is near the top of my all-time favourites so I just had to.

Jonathan Trager (John Cusack) and Sara Thomas (Kate Beckinsale) meet in a New York City Bloomingdale's when they try to buy the same pair of black cashmere gloves. Through a little help from destiny they end up spending an amazing day together despite both being in relationships. When the night is over they once again leave it up to fate to bring them together again.

Personally I think there is a lot of chemistry between Kate and John, an almost Tom and Meg kind of thing going on. Kate's accent just makes you love her even more and John Cusack, well I mean what's a romantic comedy without John Cusack.

As always Jeremy Piven picks up the role as the sidekick, this time as Jonathan's best friend Dean (same thing happened in Grosse Pointe Blank). Sara's best girl friend is played by a relatively normal Molly Shannon. Jonathan's girlfriend is played by Bridget Moynahan who is rather whiny but I didn't even recognize her because I remember her as the tough as nails Rachel in Coyote Ugly. John Corbett of My Big Fat Greek Wedding fame, plays Sara's strange musician boyfriend Lars. Finally, my favourite character (other than Sara and Jonathan of course) is the Bloomingdale's salesman that helps out Jonathan on his quest to find Sara, played by the hilarious Eugene Levy.

It's a great movie for the holiday season, and even for everyday viewing. Watch it with your significant other or if you're single you can watch it with the guy/girl you like and it'll be some good times. I love it and I hope you do too.