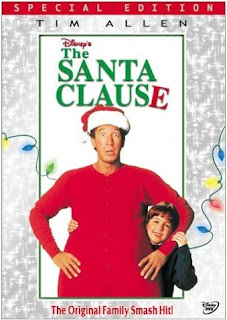 This is one of the staples of the holiday season for my family and for good reason. I mean Tim Allen isn't the highest quality of actor but he doesn't need to be in a story as ludicrously magical as this one.

Scott Calvin (Tim Allen), is an executive for a toy company, he's a divorced father who gets to spend Christmas Eve with his son Charlie (Eric Lloyd). During the night he hears a "clatter" upon the roof, and goes outside to investigate, he startles a man on the roof who falls to his death. It turns out to have been Santa. After a wild journey to the North Pole, meeting with Bernard the Elf (David Krumholtz), Scott is told he has to take on the role of Santa Claus whether he likes to or not. Over the next year he starts to transform into the jolly old fellow we all know and love. His dramatic change in appearance is perceived to be a sign of mental instability and he has to fight with his ex-wife Laura (Wendy Crewson) and her new husband Neil (Judge Reinhold), an ugly sweater wearing psychiatrist, for custody over Charlie. As Christmas nears, things start to come together and he makes everyone believe in him once again.

This is one of very few movies I actually like Tim Allen in. The others are Toy Story 1-3. Eric Lloyd hasn't been in anything important other than the other Santa Clause movies, which to be honest aren't very good. I love that Judge Reinhold is in this movie, he's just hilariously dorky and awkward in any role. If you want to see what he was like when he was younger check out Fast Times at Ridgemont High, you can also see a surfer/stoner Sean Penn as well. For those Numb3rs fans, this was when David Krumholtz was 16 so he was just getting his break in the business.

It's a fantastic light-hearted family movie that has it's serious moments to round out a great experience for everyone.