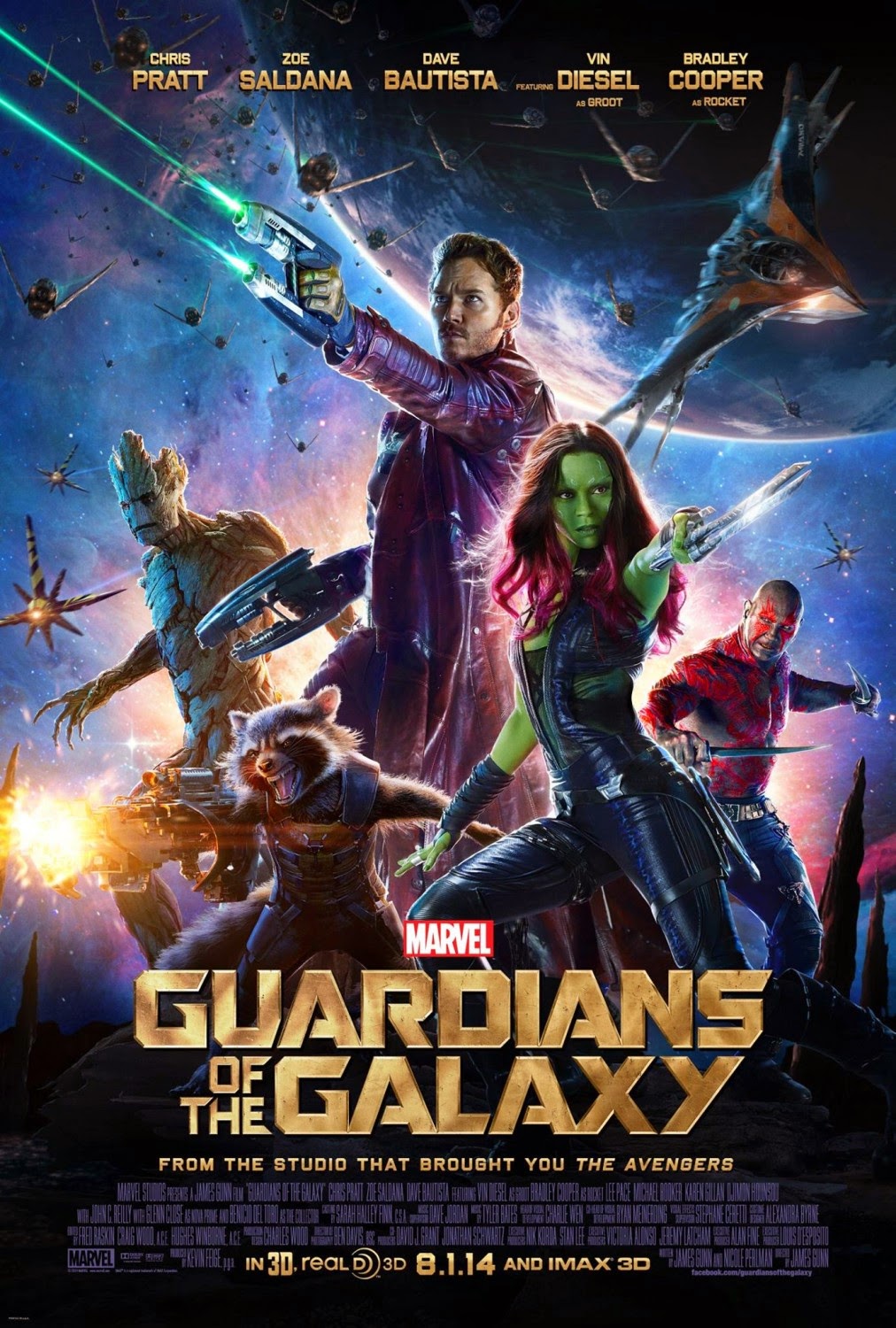 So I've been playing around with the idea of challenging myself with an adaptation of the #100happydays thing. I am going to try to watch and write a little bit about one movie a day for 100 days. I hope to keep the streak continuous and I admit even with my video watching prowess, it will be quite hard. Writing something about the movie everyday will be just another layer of difficulty baked in but it should be an interesting ride.

It is quite fortuitous timing that I was able to watch Guardians of the Galaxy as the inaugural movie for my 100 days. I definitely thought the movie was going to be great because I enjoyed the comedic style mixed with excellent action and effects as seen in the trailer. It seemed like my kind of movie but I was also a little bit worried due to all sorts of extra hype from those that saw it before me and I began to wonder if on some level I wouldn't appreciate as much because of it.

Thankfully it lived up to the hype. I was a little concerned in the first 10-15 minutes because it didn't seem to catch me but it definitely reeled me in when he got to the prison and then I was hooked. I'll give you a quick, non-spoiler run down of things. Peter Quill aka Starlord (Chris Pratt) is a "legendary" outlaw. He steals an orb, a very valuable relic, to sell to the highest bidder. Things get complicated when others want to get there hands on both him and the orb. He ends up in jail along with bounty hunters Rocket (Bradley Cooper) and Groot (Vin Diesel), mass murderer Drax (Dave Bautista), and Gamora (Zoe Saldana), the adopted daughter of Thanos. They find themselves thrust into the role of saving a planet from annihilation and this rag tag bunch of losers have to work together to do it.

Bradley Cooper did not disappoint as Rocket. There was well written humour for the character and it really worked well in tandem with Quill's rapier comedic wit. Zoe Saldana didn't really nail it for me. There was nothing wrong with her performance but it seemed a little flat at times. Karen Gillan definitely surprised me as Nebula. I admit I have not seen a lot of Doctor Who but I do know that she did step out of the comfort zone of her regular roles and she did a wonderful job. Dave Bautista is a nice surprise, in the small realm of professional wrestlers turned actors, he does an impressive job. Vin Diesel doesn't say much but does bring back fond memories of The Iron Giant. Groot as a character is a creature of few words but is one of the bright spots of the movie. Quill and Groot were my two favourite characters.

I've loved Chris Pratt ever since I first saw him as the quirky environmentalist, Ché, on The O.C.. I just can't get enough of him in Parks and Rec and he has been hitting it big lately with some amazing roles such as this year's Lego Movie, the upcoming Jurassic World, possibly the new Knight Rider reboot, and of course the Guardians of the Galaxy sequel coming July 28th, 2017. He is proving his worth as one of Hollywood's most popular leading men.

As I was told the movie boasts quite a soundtrack. It debuted at #3 on the Billboard 200. Having a penchant for older music it's definitely a nice touch to round out an already outstanding movie. I'll definitely be acquiring it through......some means.

Notes:
- Poster image obtained from www.impawards.com
- "No raccoons or tree creatures were harmed in the making of this film". Look out for this line just at the end of the credits.
- The mid-credit scene is pretty amusing so stick around for that. The post-credits scene isn't anything special and it's kind of weird but a nice reference to the 80s.
- Lee Pace as Ronan for some reason kind of reminded me of a young Brent Spiner
- There are a couple of "Hulk smashes Loki" scenes throughout the film which were a delight.
- Sean Gunn makes an appearance as one of Yondu's goons. He also is credited as being Rocket on set, which I assume is just as a mark for actors to interact with. Sean is the younger brother of director James Gunn.