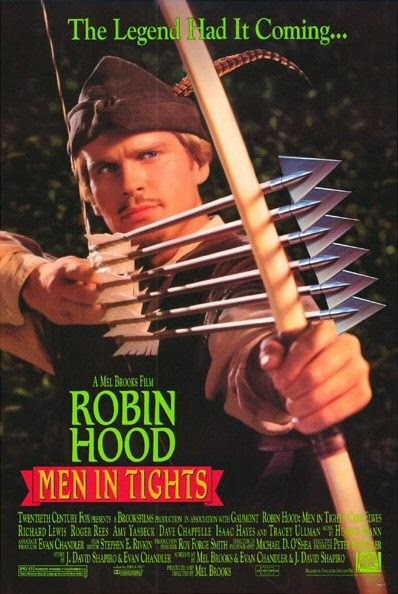 Mel Brooks is a comedic genius and anyone who says otherwise is simply just wrong.

There are so many ridiculous references in Robin Hood: Men in Tights it's hard to keep track but that's the beauty of it. There is absolutely nothing serious about the entire story and that's what makes it one of the great comedies of the 90s. Cary Elwes is magnificent as he was in his break out role as Wesley in The Princess Bride.

Elwes plays our young Robin of Loxley escaping imprisonment after the Crusades. He returns to England to Prince John (Richard Lewis) having taken over in the stead of his brother King Richard who is away on crusade. Robin teams with Blinkin (Mark Blankfield), his family's blind servant; Ahchoo (Dave Chappelle); Little John (Eric Allan Kramer), and a few others to form the tights wearing Merry Men. The Merry Men have to stop Prince John and his right hand man the Sheriff of Rottingham (Roger Rees). and Robin has to win the heart of the fair Maid Marian (Amy Yasbeck). Although often his attempts to woo Marian are thwarted by her lady-in-waiting Brunhilde (Megan Cavanaugh). I'd tell you more but I'm a little tired and there's too much to cover. Besides you don't want me to spoil it. On the other hand if you haven't seen this yet, I thoroughly judge you.

Elwes shows his great comedic style and his charm in a kind of role you don't see from him much any more. Dave Chappelle is awesome in his film debut, although it is rather unsettled not hearing him swear so much. Roger Rees is furiously entertaining as the Sheriff despite me associating him with his days on Cheers. Also I forgot to mention this when I wrote about A League of Their Own but Megan Cavanaugh is made for comedy. She often plays the unsightly roles and although she isn't the greatest looking woman, she definitely plays it up. There are too many cameos to count but notable ones are Mel Brooks as Rabbi Tuckman, Tracy Ullman as Latrine, Dick Van Patten as The Abbot, and best of all Patrick Stewart as King Richard.

If you haven't seen this one yet but have seen and enjoyed other Mel Brooks pictures such as Spaceballs, you're in for a treat. It's silly to no end, although an hour and a half seems to bookend it nicely, and it's a great sleepover movie. For those that have seen it many many times like myself, give it revisit because it never loses any comedic value.