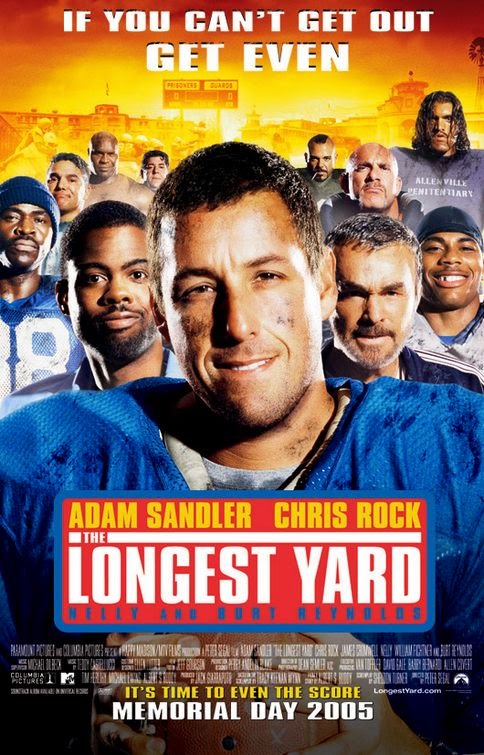 The remake of the Burt Reynolds 1974 football flick, The Longest Yard is an Adam Sandler vehicle that is mediocre at best. That's not the reason we watch these kinds of movies though, is it?

I love to watch any movie displaying athletic talent of any kind. I like other football movies like Remember the Titans, and although Sandler hasn't had a particularly strong movie since the turn of the millennium but that's okay. I can still watch 90s Sandler to get my fill. One reason why I enjoy this movie is because I was a big "wrestling" fan growing up. The cast boasts several former WWE athletes as imposing players on both teams. Although acting is not their forte, Steve Austin, Goldberg, The Great Khali, and Kevin Nash are some of the most intimidating men in the world. Also lending to the athletic realism are former NFL athletes, Terry Crews, Bob Sapp, Michael Irvin, Bill Romanowski, and Brian Bosworth. To round out our athletic cast we have....Nelly. He was apparently quite the athlete back in the day and is an avid sports fan.

The quick and dirty of this movie is that Paul Crewe (Sandler) lands himself in jail after a drunken car chase. He is recruited by the warden to boost the confidence of the semi-pro football team composed of the guards. Crewe has to put together a team of inmates that will face off against the guards in a nationally televised game.

The only two note-worthy parts of the movie are the co-starring role of Chris Rock and the bit role played by Tracy Morgan. They provide comedy at the right times and when the movie sometimes becomes stagnant their performances pick up the pace and flow. In a scene where Caretaker (Rock) talks about his mother, it is quite endearing. It is a semi-serious moment that is a refreshing counterpart to the movie as a whole.

It's good enough to put on in the background while you do some chores.