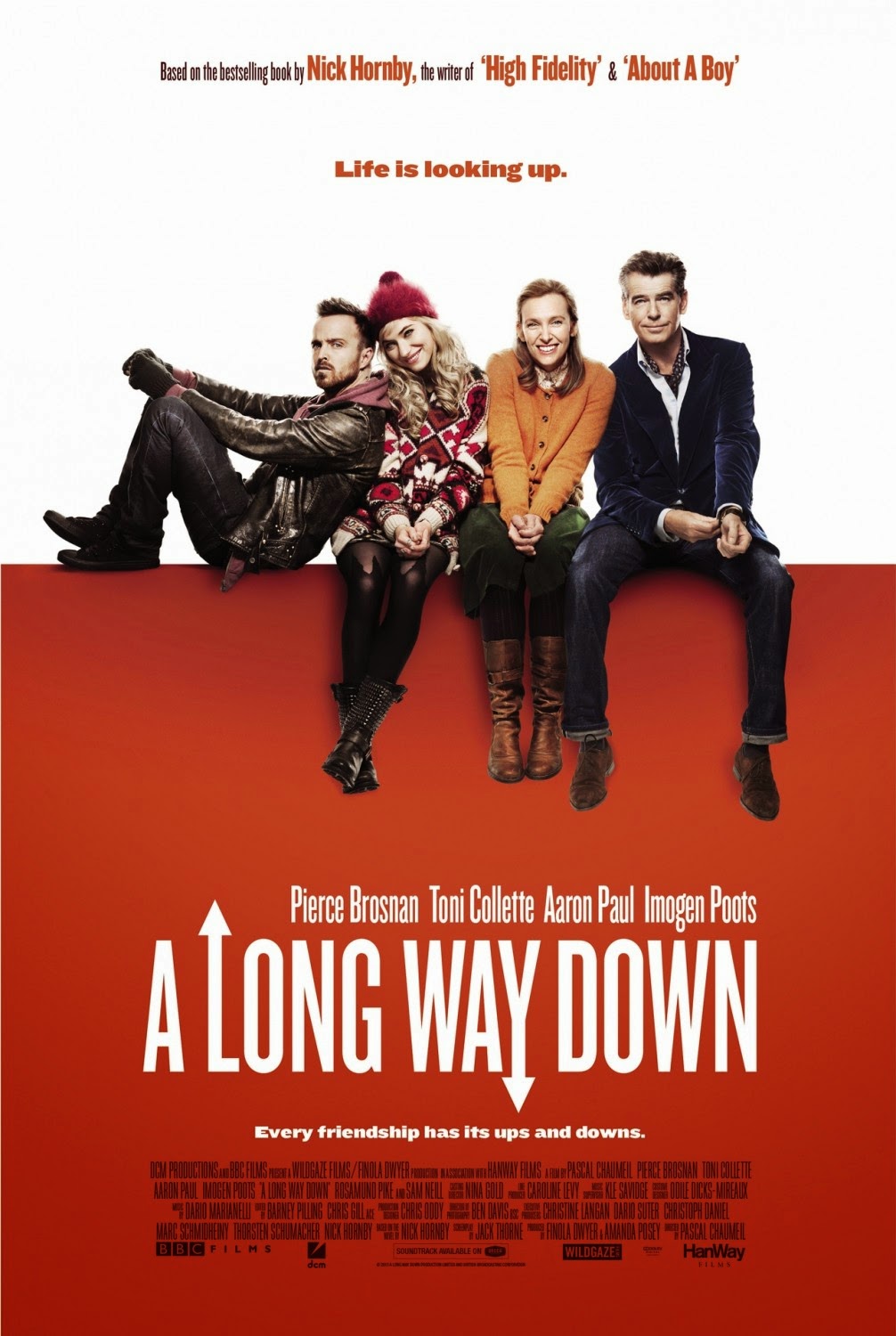 I had high hopes for A Long Way Down ever since I saw the trailer. It had potential and seemed like it could send home a really great message. So when I read so many negative reviews online I had to check it out for myself.


This is a story all about how my life got flipped turned upside down......wait that's not right. This is a story about four strangers meet on a London rooftop on New Year's Eve all with the intention to jump. They form a bond, something stronger than friendship, and they make a pact to stay alive until Valentine's Day. The story breaks to the media and they become overnight sensations. The attention is not such a blessing as previously thought and they have to deal with it the best they can.

It features a talented cast. Aaron Paul will always be Jesse to me but he seems to work as a counterpart to his British co-stars. Imogen Poots is quirky as always and offsets Paul's more serious character. Toni Collette didn't grab me until her chapter of the story when she put on a stronger performance. It might have to do with the development of her character as well. I love Pierce Brosnan but they make his character so unlikeable it's hard to sympathize. He's just the grumpy old dude with no redeeming qualities.

As a side note, for a good ten minutes after the appearance of Sam Neill, I just thought to myself that I would love to see a Pierce Brosnan/Sam Neill movie. Have you ever seen Neill's test footage as James Bond? It's not too shabby.

I'm feeling rather forgiving today so I'm going to say that most critics are a little harsh on this one. It's just that it was missing a few things. It seems that a lot of different aspects: character development, film structure, believability, and chemistry were just a couple steps off from being right. In terms of believability, in these types of movies it doesn't have to be plausible but it has to make you think that it could be. The different chapters of the movie seemed to have cut it up a bit abruptly. It tells the story from four point of views at different points in time so it's not as smooth as it could have been. This type of sequencing can work but in this case it doesn't quite manage to pull it off. Honestly, it might have worked better as an anthology film composed of four short stories and converging at the end. Also, the pairings of the characters seemed a bit forced. It seems more as if there is a Poots and Paul romance and then just Brosnan and Collette in the background.

It's a nice message they are trying to convey however cheesy it may be. The movie falters a bit but if you give it a chance and go in with no expectations you might come out the other side not completely regretting your time spent on this one. Otherwise, you can pass and just watch Nick Hornby's better works like About a Boy or High Fidelity.